A Sudden Lenticular On Mount Shasta

A northern view of a Mount Shasta lenticular sunset.

Though Tuesday started out clear, by the middle of the day it was rather overcast. It began to clear up mid-afternoon, just in time for me to take my daughter to her dance class. At that time there was just a small, nascent lenticular forming over Mount Shasta. After dropping her off I took my two sons up to Bunny Flat to see how things looked up there. By the time we arrived, the cloud had grown significantly. After picking her up and running into the store, the cloud had grown further still. We headed up to the north side of the mountain to catch the sunset. As I stood out in the manzanita, my kids ran around, chasing each other happily. It was a great evening.

Awesome clouds were visible at Bunny Flat. The lenticular was rather chaotic but the quilt of puffy clouds added a lot of beauty to the scene.

Arriving at the north side of Mount Shasta, the sunlight had just lifted off the lowest elevations at the foot of the mountain. The lenticular had grown quite a bit. Oddly, there was a band of cloud catching a lot of sunlight. I am confidant it was not a contrail. It was too vague, and discontinuous to have come from a plane. It did add an odd dimension to the scene. 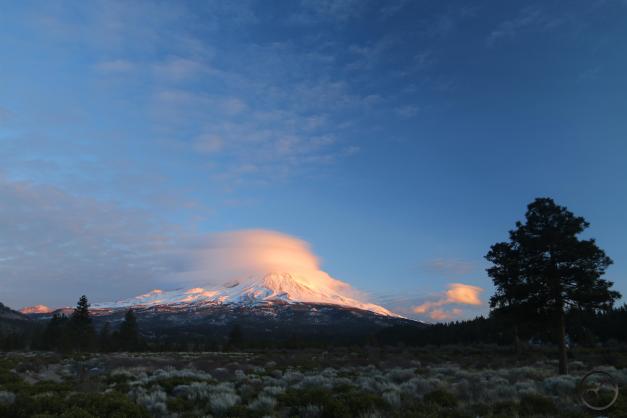 As the alpenglow intensified, a smaller, free-floating lenticular manifested off to the southwest. It caught a fair amount of the evening light. The quilt of clouds above Mount Shasta, however, were not getting much light. I think that clouds beyond the horizon were blocking the sunlight. 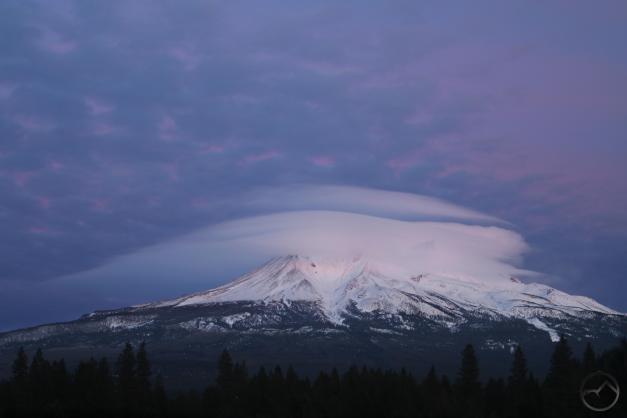 From the west the clouds retained an interesting shape, even though the light had faded on the mountain. The sky still glowed purple with the last, lingering bits of sunlight. I had not anticipated a beautiful lenticular sunset but I was glad to have been caught off-guard!

2 comments on “A Sudden Lenticular On Mount Shasta”