The Lenticulars Did Not Make It Through The Night

Mount Shasta with lenticulars at sunset.

This past Monday, Mount Shasta was graced with another lenticular event. There was a small cap on the mountain itself and another lens shaped cloud floating a short distance away from the southwest. I spent much of the day tracking a very obscure and hidden waterfall down on the edges of 2018’s Delta Fire. While down in the Sacramento River canyon, I was able to keep track of the clouds around the mountain. I was watching to see if they would sustain themselves or dissipate. There are times when lenticular clouds obviously have the strength to sustain themselves for a lengthy duration while at other times, they always deem on the cusp of disappearing. It was this latter condition that seemed to characterize these particular clouds. Nonetheless I watched them with interest until the free-floating disk finally dissolved into nothing. With the small cap still on Mount Shasta, I decided to head out for the sunset. While still driving to a good location, I was pleased to see that the free-floating cloud had suddenly coalesced and looked to sustain itself for the sunset! It would be better than I had anticipated!

At the north end of the Shasta Valley, a large plume of smoke was occupying much of the area around Hornbrook and Paradise Craggy. I’m not sure what the cause was… 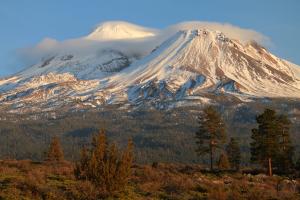 A nice layer of cloud surrounded the summit of Mount Shasta. At times it was gauzy enough to see the summit’s details. 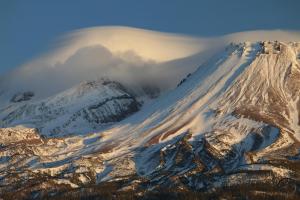 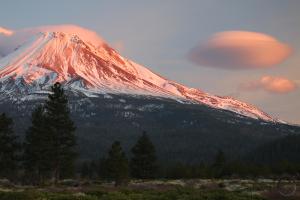 The free-floating cloud was in fine form as the alpenglow set in. 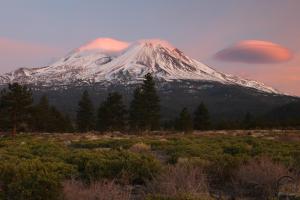 Mount Shasta and the lenticulars at the last shades of alpenglow.

As I watched the color fade on the mountain, I had Joe Walsh’s classic “Help Me Through The Night” in my head. While I wanted that disk to make it until sunrise, I had my doubts that it would be able to. It would surely need help to last through the night.

A cloudless sunrise on Mount Shasta.

Just as suspected, when I got up the next morning, there was not a cloud in the sky. At some point everything just disappeared. It fascinates me how the conditions on Mount Shasta can change so swiftly. We always throw around the phrase “the mountain makes it own weather” and that certainly is the case, but the way things come and go so suddenly, the turbulence that must be present in the air currents is an awe-inspiring thing. I had gotten up early to check, just in case the sunrise would be graced by the fine lenticulars that had been present at sunset. Finding nothing, I decided to hang around for sunrise anyway. It’s not as if a cloudless sunrise on Mount Shasta isn’t spectacular in its own right? Perhaps I am getting spoiled…