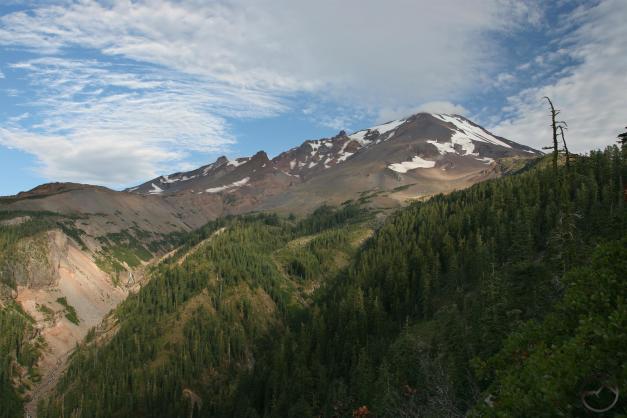 It goes without saying that Mount Shasta is an incredibly scenic mountain. Hiking on it almost guarantees incredible views and beautiful scenes, whether at the lower elevations or at higher elevations. Indeed, hiking on the mountain does not fail to disappoint and, given the mountain’s shape and contour, there is great diversity in its appearance from the trail. It seems there is no end to the spectacular vistas and different trails on Mount Shasta. Each hiker who ventures onto the mountain will, no doubt, find their particular favorite spot. There are so many different aspects to the mountain, different corners will appeal to different hikers.

For me, there are four vistas that stand out above all the others. These all feature different combinations of those elemental mountain features that make up an unforgettable, life-affirming and utterly fantastic view. Not surprisingly, waterfalls are a common theme among these four spots but there are other components that heighten the meaning of these vistas. All four locations are grand spaces. The mountain looms high, there are canyons below. The roar of the water is audible but the sound of rockfall is also present. The living nature of the mountain is evident. Glaciers, while not an overwhelming presence are also featured and embellish the scenes. In sum, these particular perspectives on Mount Shasta capture the mountain’s grandeur, varied appearance, and terrific hiking potential.

Three of the four vistas are on the southeast side of Mount Shasta and one is on the north. Though the southeast three are near each other, the mountain has very, very different visages from those three perspectives. The northern view features similar elements but looks even more different due to Shastina’s presence. I have will address the four counterclockwise from the top.

One of the most mysterious perspectives on Mount Shasta, due in large measure to Coquette Falls. Marked on topographic maps, this waterfall is the least known of Mount Shasta’s four named cataracts. Due to shifts in the stream bed, the original Coquette Falls has gone dry but now the water plummets over New Coquette Falls (sometimes called Bolam Creek Falls). The overall scene is incredible, with the Bolam Glacier-clad summit of Mount Shasta looming over the scene and the off-kilter bulk of Shastina rising like an unstable heap above the falls. Nearly 400 feet deep, Bolam Creek Canyon drops away below the visit point while wildflowers brighten the entire scene. It is a rarely seen and magnificent spectacle.

There is, perhaps, no more epic feature on Mount Shasta than Mud Creek Canyon. Over 1,000 feet deep and cutting through an incredible number of Mount Shasta’s volcanic strata, this is one of the greatest perspectives on the Mountain. Colorful, gnarled spires loom near the summit alongside the Konwakiton Glacier while towering hoodoos cling to the cliffs of the upper canyon. Seeps and spring are numerous, leaking out from between various layers exposed within the canyon. The sound of rockfall is punctuates the constant din of Mud Creek cascading through the depths. At the very head of the canyon Konwakiton Falls pours in two twin streams over vividly colored cliffs. In the end, it is hard to enumerate all the incredible features of this marvelous vista!

While the previous view took in Mud Creek Canyon from the high on the west rim, the Clear Creek perspective views down the length of the canyon from the east. Slightly further away, it gives the viewer the opportunity to take in much more of the mountain and all of its grand features. The spires of Sargents Ridge, including Shastarama Point and Thumb Rock feature prominently. The massive bulk of Hotlum Cone, the largest of Mount Shasta’s four eruption cones, is readily apparent from this angle. The Konwakiton, Watkins and an askance view of the Wintun Glacier all add a great deal of alpine glory to this angle. In the end, however, the eye is ultimately drawn once again to Mud Creek Canyon. This perspective looks straight at awesome Mud Creek Falls, one of the mountains four main waterfalls and one that makes a claim on its most beautiful.

At about 350 feet high, Ash Creek Falls is the tallest waterfall on Mount Shasta and probably its most beautiful. While the falls is certainly the centerpiece of this view, Mount Shasta still overshadows everything else and draws the eye up towards the mountain’s summit. Between the falls and the summit is the upper half of the Wintun Glacier, California’s third largest. Downstream from the falls, Ash Creek Canyon falls away to the west. Over 300 feet deep, it is not quite impressive as the larger section above the falls but it is nonetheless a fine compliment to the entire view. This is said to have been John Muir’s favorite view of Mount Shasta.

One comment on “My Four Favorite Vistas On Mount Shasta”