Mount Shasta’s Show Fleeting But A Fine One (And Mount Eddy Too!)

Though Wednesday proved to be clear-skied Thursday morning offered something altogether different. The forecast called for clouds in the morning. With that in mind, I headed out yet again, but I had slept longer than normal so I only had a few minutes to get to a vantage point before the color really set in. The destination was one only a few minutes from my house and it is a classic standby. I generally try to avoid this one these days but when time is short, it works in a pinch. This turned out to be a good morning to go there, since the color on Mount Shasta was good and the clouds were interesting but the real show was over Mount Eddy. This spot has a good perspective on both, which really paid off.

The summit of Mount Shasta was partially obscured in the clouds but the clouds themselves were quite nice. They soaked up the light of the rising sun in fine fashion. It was hard to distinguish but there was actually a bit of a lenticular in a higher layer of cloud. Though it would have been challenging to really appreciate from the north, the mountain also cast a nice sunrise shadow. Overall, a nice sunrise, but not one as grand as I had hoped. 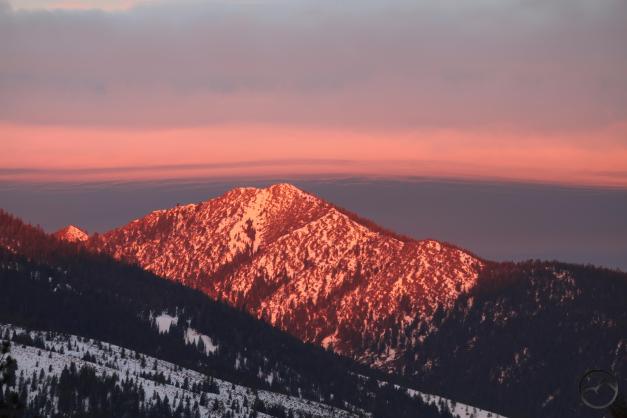 While Mount Shasta lacked really interesting clouds, the peaks to the west were graced with lenticular-like clouds. Peak 7,869 was light up brightly by the morning light. Over the summit a stream of cloud coursed in layered urgency. It too was alight. This prominent peak is surprisingly nameless and I have come up with various names in the past but that will have to be the subject of another post. If you have a name for this peak, leave a comment. I would love to hear other ideas for this one. 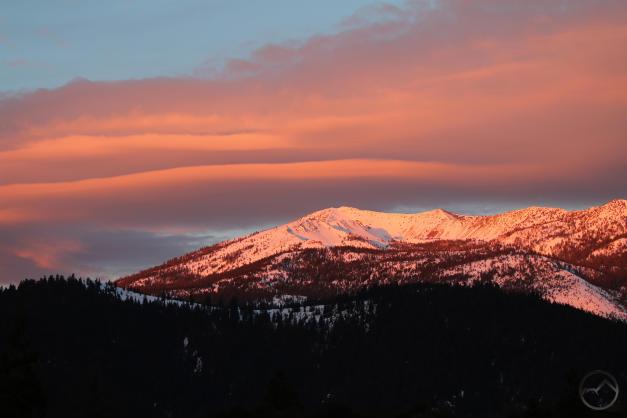 Mount Eddy was the real star of the morning. Even though the eastern side of the mountain is not its best visage it is still higher and larger than anything to the west and the rugged, treeless upper flanks are still quite scenic. Thursday morning saw the mountain overshadowed by a layered lenticular that was highlighted by the sunrise glow. It was hard to get the entire scene into frame and the cloud extended well south of Mount Eddy but the best parts were captured and it ended up being one of the better cloud formations I have captured over that mountain.

Without warning, the color began to fade as the sun rose and the clouds blocked out the light. It grew really overcast before all the clouds blew away, leaving only a small lenticular over Mount Shasta. That too was gone before noon, leaving clear skies for the rest of the day. It was a short performance but it was a good one. 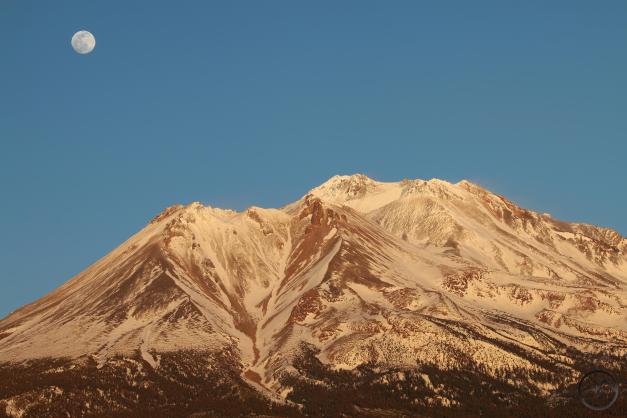 By evening the clouds had not made a return but, on the way home from renting some skis for my son, I saw the moon had risen over Mount Shasta. That was worth a stop to capture with the mountain starting to light up with alpenglow. Considering there were no clouds over the mountain, it was a nice way to end the day. We’ll see what tomorrow brings…