Mount Shasta: 2 Moonrises, 3 Sunrises (And Some Other Stuff)

The last few days have been pretty ones here in Mount Shasta. Not only has the weather been gorgeous but the moon was full. This presented the opportunity to try to capture a shot of Mount Shasta along with a lunar presence. Considering all the other work I have been caught up in lately, this seemed like a nice excuse to get outside for a couple evenings. 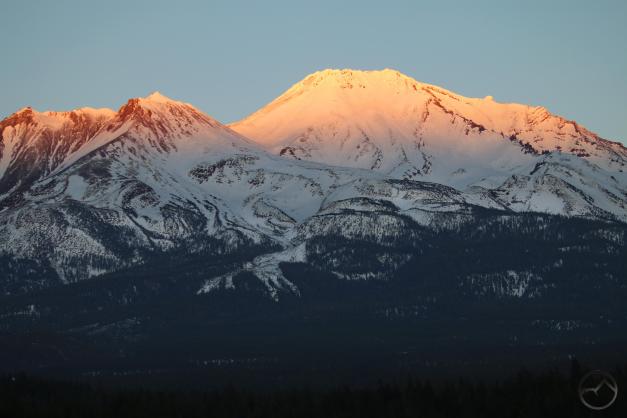 The first evening was clear and cold. Though I was out to capture the rising moon, one can never get too much alpenglow on Mount Shasta. From my perch, I was able to watch the sunlight slowly move up the flanks of the mountain, the glow slowly slipping away as the sun set. The moon was set to appear at any moment.

Just as the last bit of color slipped off the top of Mount Shasta, the moon breached the horizon just above the Red Banks. The moon glowed brightly as the mountain turned cold silver in the absence of the warm sunlight. The moon was large and glowing as it rose swiftly. It always seems to move faster when it is proximity to a large object against which to measure its speed. This evening it sailed upwards into the heavens above Mount Shasta with alacrity. Satisfied, I retired home for the evening, thinking the next morning might be a good opportunity to capture a corresponding sunrise.

I headed north the following morning to Truchas Ridge. The valley was streaked with tendrils of fog. Normally I like the foggy conditions when they are thin like this because it allows me to see the mountain but still add some interesting light-catching conditions low in the frame. Unfortunately, this particular morning the light never really showed up and the sunrise was a little lackluster. It was a great morning to enjoy the solitude and scenery out there though, for which I am grateful. 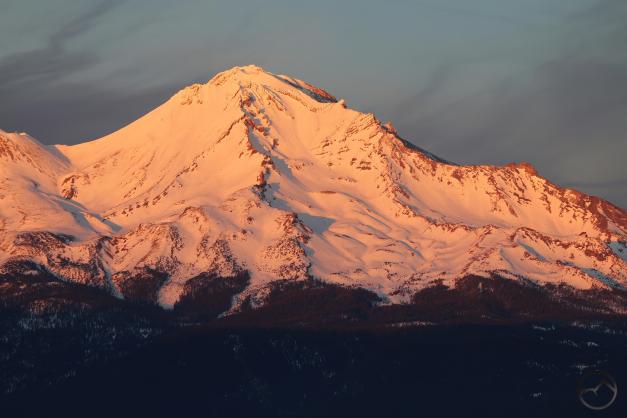 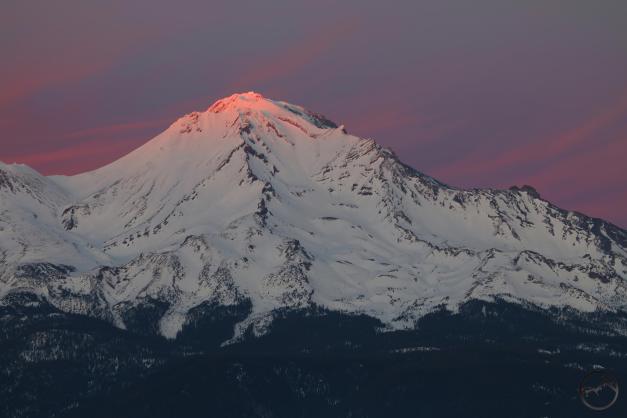 That afternoon, I resolved to head out and capture the full moon rising. It’s position was a challenging one with regards to getting the mountain with any sort of light still on it. Based on its position, I though the best opportunity was going to be from the Castle Lake area. I headed up with time to spare and enjoyed a spectacularly colorful sunset. As is typical of a great sunset, the color started off vivid orange but eventually mellowed into a beautiful pink as the sunlight crept up toward the summit. However, as the mountain darkened, the sky burnt with shades of purple and pink, providing a terrific contrast behind Mount Shasta.

Just as the last light faded off the summit, the moon broke the horizon to the south of Mount Shasta. It crept slowly upward against a colorful sky. Wisps of cloud partially obscured it at times but it was a visible for the most part. As far as it was from the mountain, I had to use my wide angle lens to capture both, so the moon appears as only a small disc. Though diminutive in appearance in this way, the overall image, with Mount Shasta bathed in afterglow and the sky still aflame, it was a spectacular sequence! 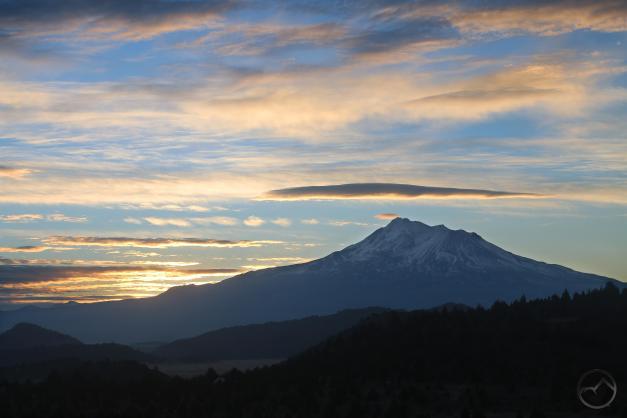 The conditions seemed hopeful for a spectacular sunrise the following morning, so once again I headed up to Truchas Ridge. It was a bit of an unusual morning in terms of how the clouds developed. Initially I thought I was going to get a good lenticular but that faded very swiftly as the predawn color bled out of the clouds. Briefly there was hardly anything in the sky at all but then, as the sun was preparing to appear, the clouds raced back in and a small lenticular stack even formed over Mount Shasta. While not the best sunrise, it was still a good one, and one that definitely exceed my crestfallen expectations from just a few moments earlier. 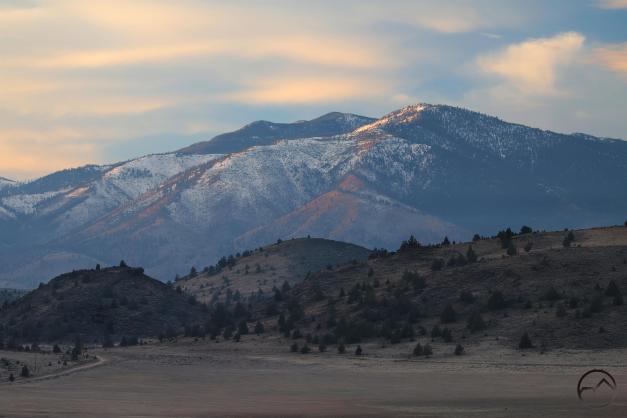 There are many more vistas at the Ridge than just of Mount Shasta. One such was to the west, where China Mountain looked regal in the morning light. This peak is the third highest in the Mount Shasta area (not counting Shastina or other prominent points on Mount Shasta itself) and, though it hides many beautiful features (cliffs, lakes, waterfalls etc.), from down in the valley it does not present an impressive appearance. Thus I was glad to capture a shot of the peak that gave it a bit more gravitas than the typical scenes. 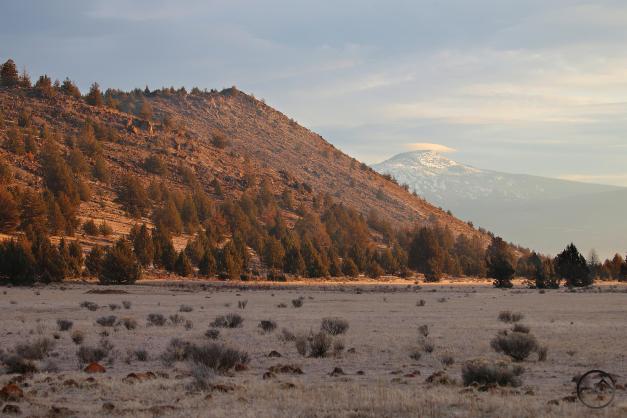 Another great view was of the Goosenest, another of the five tallest peaks around Mount Shasta. Its black lava flows covered with white snow, the massive shield volcano glowed in the morning light. What made it even more memorable was the peak boasted a small lenticular of its own! It’s a great morning when scenes like this are occurring at the same time as a majestic sunrises on Mount Shasta and all are visible with the turn of the head. Sadly, the subsequent sunset featured some excellent clouds but real life (and kids) kept from getting out and capturing it. I had to watch appreciatively while engaged elsewhere. Despite missing it, even seeing it, while helping my kids is a blessing. A century ago, every brilliant sunset was preserved only in memory, or perhaps in painting, so the opportunity to capture what I can is more valuable to me than my meager words can properly express. 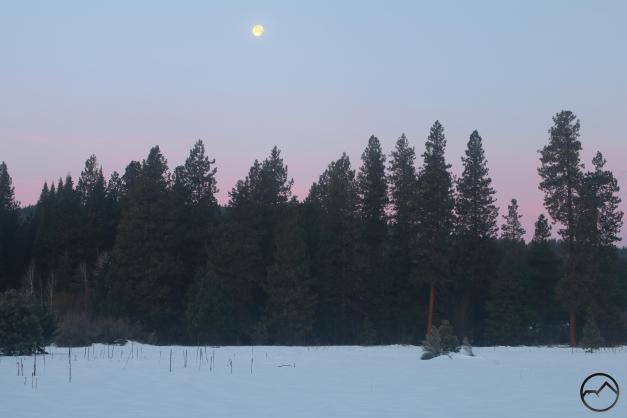 The following morning I headed out once again. Once again, the conditions seemed good for an impressive sunrise. However, this time McCloud seemed like the place to be, given the position of the clouds. When I got to my spot, the moon was setting. Given that I had just been questing after moonrises, I reckoned I might as well capture a moonset. 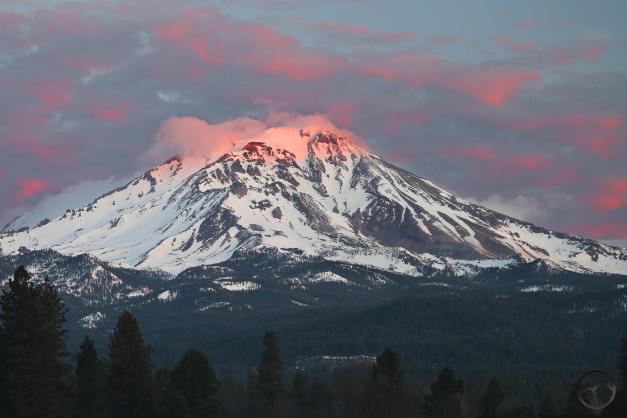 Of course, I did not wait for the moon to disappear beyond the horizon because, while it was sinking lower, Mount Shasta and the clouds around it burst gloriously awake as the dawn sunlight hit them. I love sunrise in McCloud. The mountain’s crags and spires are magnificent when bathed in aurora’s glow (really, they are magnificent all the time, but dawn is when they are at their best!).

I had not planned on pursuing any more shots of Mount Shasta for the day, but as I headed to church in the afternoon, the mountain was once again bathed in lustrous alpenglow. I stopped right in the middle of the street near downtown by Sisson Meadow and started clicking away. It’s the most common view of the mountain, but what an uncommonly amazing common view from a downtown!

In the end, it was a great span of days with some incredible sights. Moonrises, Sunrises, Sunsets all forming an incredible panoply of light, rock, ice and all the other elements of creation, all working together to create an unforgettable landscape.

One comment on “Mount Shasta: 2 Moonrises, 3 Sunrises (And Some Other Stuff)”