The last few days have witnessed some interesting and beautiful atmospheric conditions over Mount Shasta. I have been swamped getting work done for the new business my wife and I are starting up but early mornings and pockets of time in the afternoon have let me get out and document the colors and conditions on the mountain. I am thankful for that, as it has given me some moments of quiet in the midst of the craziness that has taken over our lives.

Things kicked off on Tuesday afternoon. The day had been largely uneventful in the sky over the mountain but late in the day the barest whisper of a cloud formation manifested. I thought I had best get to a vantage point quickly, so headed up to one behind my house. When I got there the sun was setting but the cloud had nearly dissipated. Perhaps this was going to be nothing after all.

Suddenly, as the color on the mountain intensified as the sun was well below the horizon, the cloud burst into a tight stack of disks. It was amazing how quickly this formation amplified itself and I was glad I had lingered to capture its awesome growth. This gave me confidence that there was gong to be a good show in the morning! 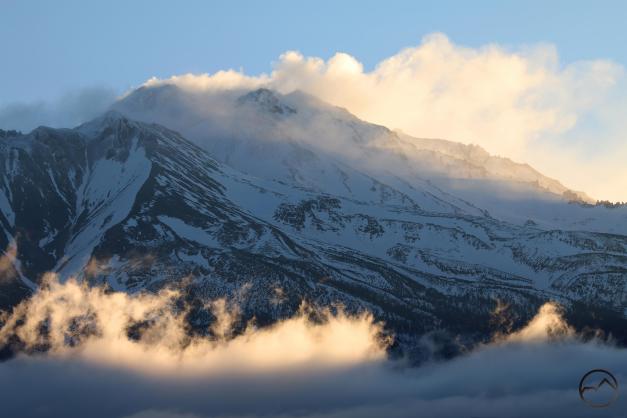 Often times, when a lenticular is late in developing or growing after the sun sets, it will linger through the night and put on a spectacular show in the morning. Since the lenticular on Tuesday was so late in forming, I thought I had better head out early on Wednesday. Though I was out well before sunrise, there was no lenticular and the sunrise, though beautiful as always, was not unusual in any way. However, as I was heading home the winds kicked up and clouds started to billow off of Mount Shasta, catching the morning light. No lenticular in sight, but it was awesome nonetheless. 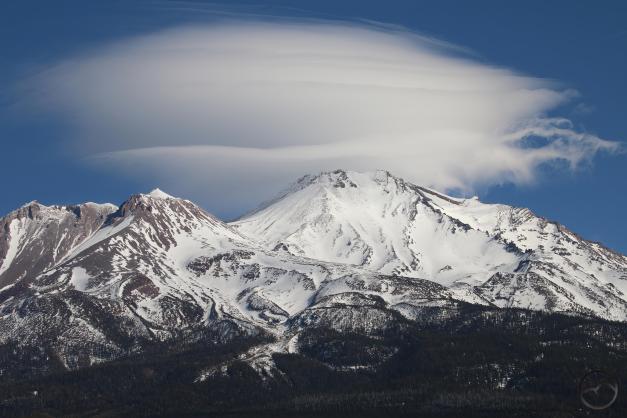 My anticipation was met later in the morning. A large cloud manifested over Mount Shasta and, of course, I needed to head out to capture it. The cloud was in a constant state of flux, flattening, inflating, expanding, contrasting. I could post 100 pictures here and they would all look like a different cloud over the mountain. 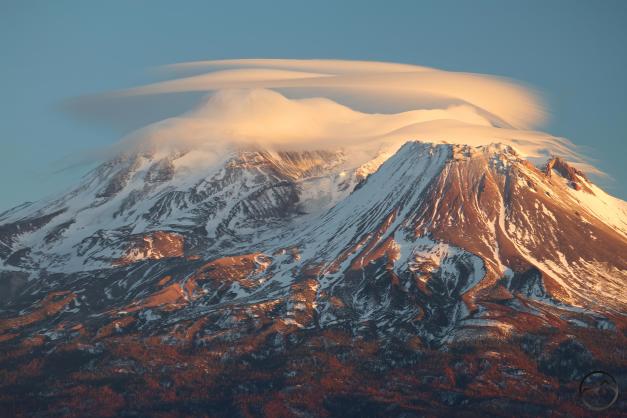 The cloud persisted throughout the day and, as sunset neared, I reckoned I ought to head out to Truchas Ridge. By the time I got there, the cloud had shrunk considerably, forming a little cap around the summit of Mount Shasta.

However, while the cloud over the mountain had contracted, to small satellite clouds had expanded. These lay to the south of Mount Shasta and hovered magnificently over the great mountain. I hiked out to Artist Point and watched the sun go down while my kids played climbed on rocks and made their own fun, seemingly oblivious to the glory that was before them. What is one more Mount Shasta sunset to kids? It is everyday life to them and they know no different!

The satellite lenticulars maintained their integrity through the night. By morning they had shifted somewhat, but they were still there. Before the dawn, I had decided to head the Mount Shasta’s northeast side. Mornings are better from McCloud but the position of the clouds meant the northeast would be the place to be for a good show. I was not disappointed, as the sky glowed, the disks burned and Mount Shasta, crowned with a small lenticular, was a steadfast anchor to the incredible scene. 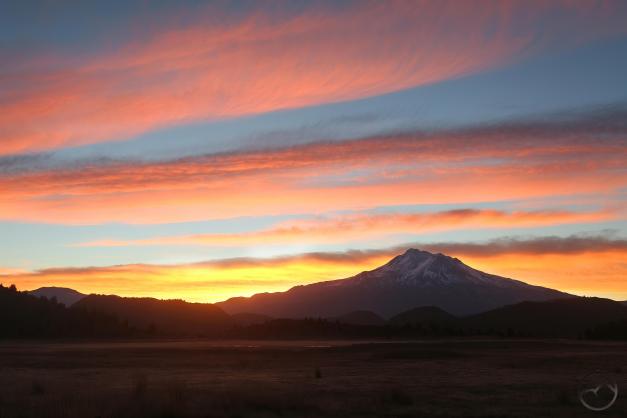 The large lenticulars lingered through the morning on Thursday but by noon they had gone, leaving wisps over Mount Shasta. The sunset lacked enough interest to break me away from the obligations that I had. However, the predawn hours looked interesting on Friday, so I thought it best to head out once again. As the sun climbed to the horizon the sky hummed with color, and it proved to be yet another beautiful morning around the mountain. 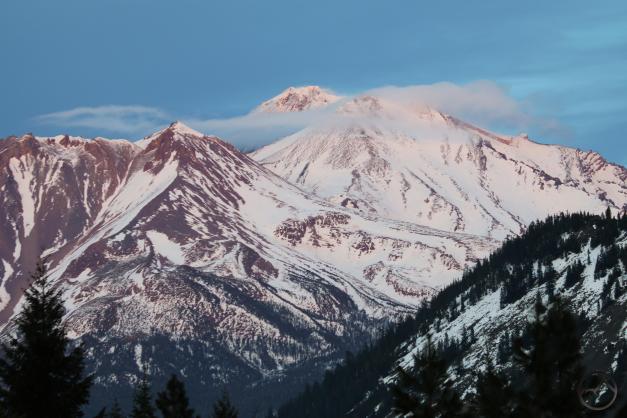 Friday had unsettled weather all day and, in the end, the sunset lacked punch. I headed back to the spot behind my house to capture the lest vestiges of activity over the mountain. During the night the weather system that had brought all the activity in the sky moved on, leaving nothing over the mountain as I write this Saturday morning.

We find ourselves, once again, in a strange place midwinter. There has been no precipitation since 5 days into January and now we are 5 days into February. There is no precipitation in the forecast and temperatures are warming. In spite of this, the snow from our snowy December has frozen and lingers. My kids have not been deterred and enjoy the conditions, such as they are. I remain optimistic that precipitation will come and lots of it and by April we will be longing for clear skies and dry weather. Lord may it be so!