Kids Don’t Appreciate Awesome Sunsets! (Plus Some Neat Things In The Sky) 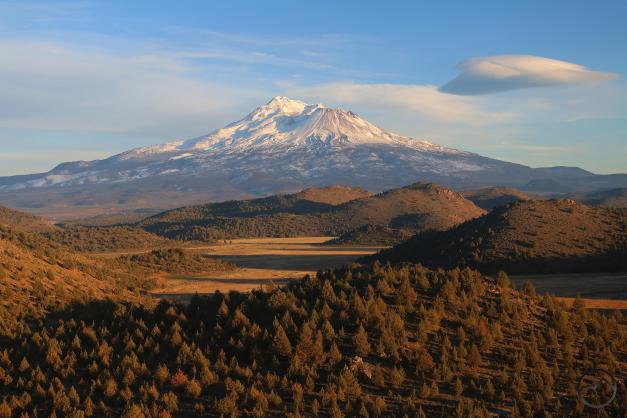 A sleek lenticular hovers to the southwest of Mount Shasta.

With slightly warmer temperatures and a nice lenticular developing near Mount Shasta, my wife and I decided to haul the brood out to Truchas Ridge for a picnic dinner. While we normally eat Chicken a la Nas or frito pies when we were out there, this was a quicker operation and this time we feasted on apples and cheese and frenchbread. 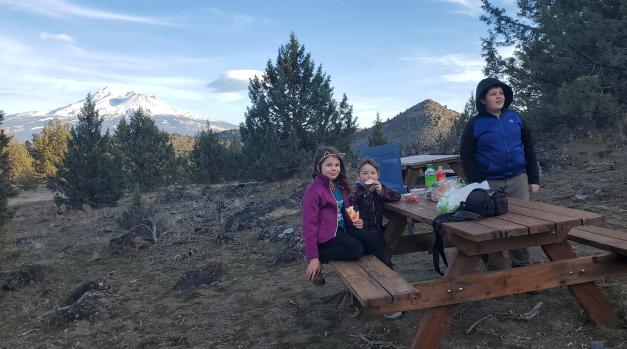 The kids were happy to be out there again and after eating, the younger ones ran off to gallop around Tesuque Valley. I headed out to Artist Point ahead of everyone else. While walking the length of the ridge, I paused to check on the Quemado Tree, which was struck by lightning back in May. While much of the tree was killed in the blast or the ensuing fire, some of it was still clinging to life. I really hope the tree survives. 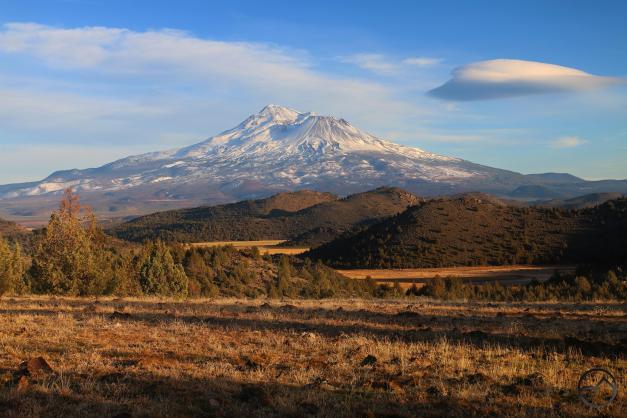 There are many places along the ridge between the basecamp and Artist Point where there are excellent views of Mount Shasta. Normally I pass by these but on this day I felt compelled to stop and capture an image of the mountain and the cloud with the long shadows of nearby trees cutting across the grassy flat in the foreground. It was fantastic scene. Some people have suggested this as a campsite, and while certainly a good spot, I think the other locations I have selected will work even better.

I got to Artist Point and set my camera up. There was still a lot of time before the sunset, so a continued on the 50 yards further to the east to the spot we call Panorama Point. It’s a pretty spectacular location in its own right, though I think the framing is slightly better at Artist Point. On this occasion, the view was stunning as always, but augmented by the awesome clouds in the sky and the light from the low sun. It’s a magnificent spectacle to behold. 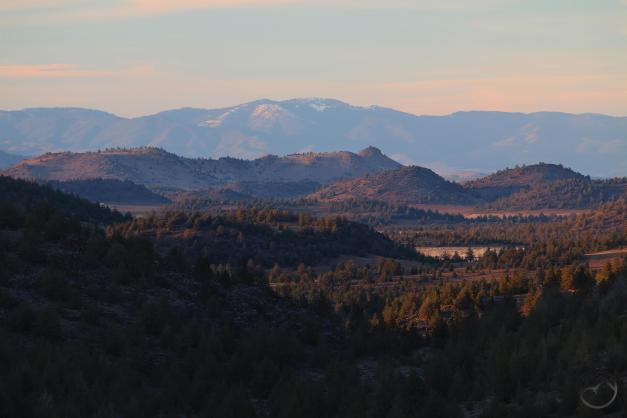 While waiting for the sun to sink even lower, I made my way a few yards to the north, where the vista opens up and you can look all the way to Oregon. Nearby Steamboat Mountain in the Shasta Valley Wildlife Refuge is prominently visible, as is the snowy dome of Soda Mountain, which is the highest point of the Cascade-Siskiyou National Monument. The land to the left of the peak, while in the national monument, is also encompassed in the Soda Mountain Wilderness. 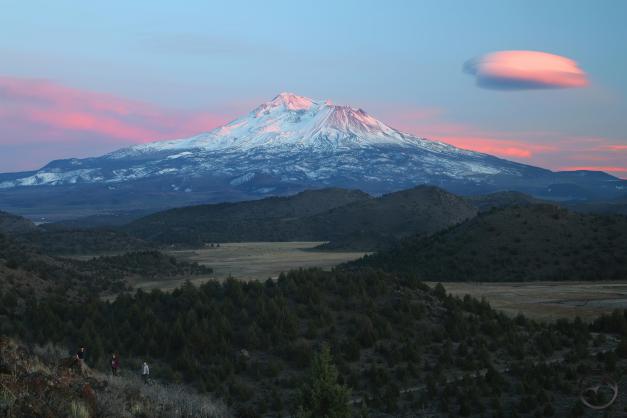 By this point, my wife and kids arrived at the vista. The three kids promptly scampered over to a large cluster of crags, where they engaged in some game involving spies, coyotes and clonetroopers. They yammered happily, scrambling on the rocks and nearly oblivious to the scene unfolding behind them. Against their will, I got them to stand still so I could capture a shot of them. By this time, the mountain had been given over to the alpenglow and the clouds, both the vast band to the south and the lenticular, were also glowing pink in the last vestiges of the day. 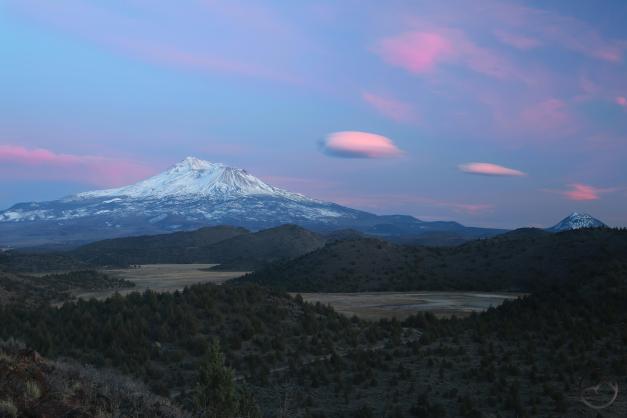 Even after the sunlight had forsaken Mount Shasta and the peak was left a ghostly white, the sky was still filled with color. Artist Point indeed! While the lenticular was still holding its form, a secondary cloud had taken shape a little further west. While this too turned pink, the rest of the clouds in the sky, which are further away from our vantage point, began to turn shades of purple. My wife and watched the show together. The only sounds were our kids and the gentle wind blowing through the trees. It was sublime. 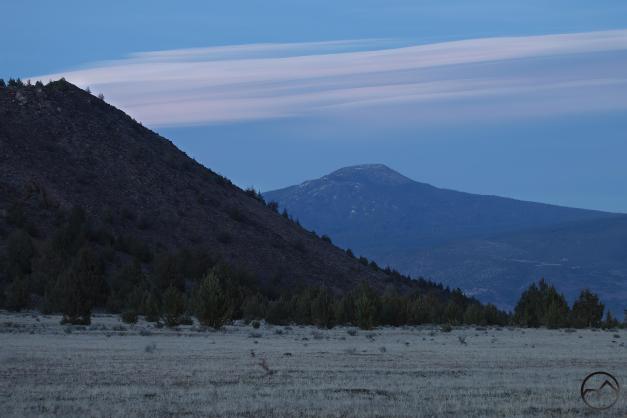 We finally hiked back to basecamp in the fading light. We hoped into the car and headed down the hill. On our way out to the main road, I had to stop and capture a shot of the Goosenest . A large wave lenticular had formed over it. There wasn’t much light left but I was able to still capture a shot of the peak with the impressive cloud over it. After this, the darkness fell upon the land and we headed home, glowing from yet another magnificent spectacle at Truchas Ridge. 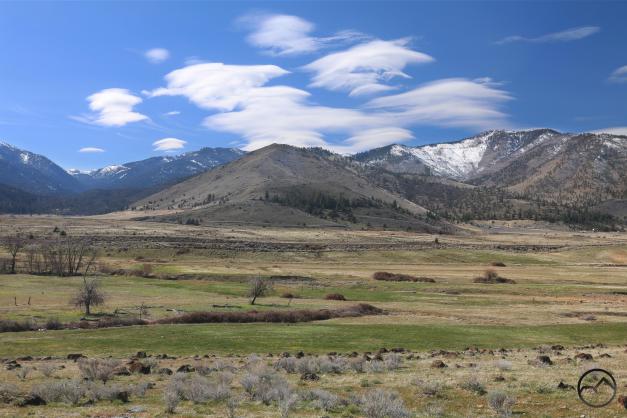 The next day, the sky was filled with awesome clouds, seemingly in every direction. Whether east over Goosenest,  south over the Castle Crags or west, above the Trinity Divide, there were lenticulars, waves and other strange formations. It was quite a spectacle! 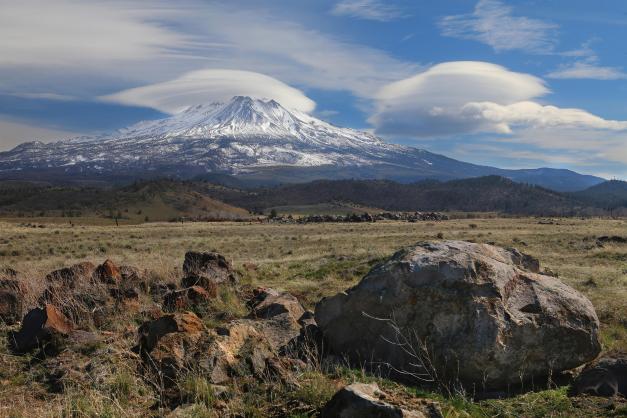 Naturally, the best clouds were present over Mount Shasta. Not only was there a lenticular stack over the summit of the mountain but the large disk that had been there the previous night continued to hover to the southwest. These clouds combined, as well as all the other pyrotechnics in the sky, made for one of the most memorable meteorological performances I have seen for quite a while.