A fairly easy trail on the rarely seen east side of Mount Shasta with staggering views of the mountain and two of its largest glaciers and a beautiful alpine creek. A cross country excursion from the end of the trail leads to majestic Ash Creek Falls, reportedly John Muir’s favorite spot on Mount Shasta.

The lonely side of the mountain

The east side of Mount Shasta is the lonely side of the great mountain. No communities gaze upward at its glaciated verges and no paved roads access its slopes.This should not be taken as a discouragement, for the east side of Mount Shasta is perhaps its most majestic side. Cloaked in the massive sheets of the Hotlum and Wintun Glaciers, this is the wildest side of an extremely wild mountain. Indicative of the forsaken nature of the east side, one lone trail, the Brewer Creek Trail, provides access to the upper reaches of California’s monumental volcano. In this case, lone most definitely does not mean lame. The Brewer Creek Trail is an absolutely stunning path with epic views of Mount Shasta and two of its largest glaciers, the Hotlum (California’s largest) and the Wintun (California’s third largest). The trail accesses routes ascending both the Hotlum and Wintun Glaciers. These are premier routes up the mountain. The Brewer Creek Trail is also the initial portion of the route climbing the Hotlum-Wintun Ridge. This route passes the Hotoon (combination of Hotlum and Wyntoon, a local variant of Wintun) Snowfield, a non-glacial but permanent body of snow high on Mount Shasta. For those not intent on and ascent of Mount Shasta, the Brewer Creek Trail still provides fantastic hiking opportunities. In addition to fantastic views and the chance to explore the delicate, alpine riparian world of Brewer Creek, the trail provides access to Ash Creek Falls, Mount Shasta’s most sublime waterfall. The vista of the falls with Mount Shasta and the Wintun Glacier looming high overhead is purported to have been John Muir’s favorite view of the volcano.

The Brewer Creek Trail departs the trailhead in a southerly direction, crossing the boundary of the Mount Shasta Wilderness fairly quickly. At almost 7,300 feet, the trailhead is the second highest on Mount Shasta after the Old Ski Bowl Trailhead. The first mile of the trail is through continuous tree cover, mostly consisting of red fir and whitebark pine. There are occasional views of the great mountain through the trees but they are never particularly good, just indications of what is to come. Patience will be rewarded. The trail switchbacks constantly, always climbing at a very moderate rate, never very steeply. Nonetheless, the path eats away at the elevation, ultimately gaining 300 feet in about 0.75 miles. Finally, the trail makes one final turn to the south before it levels off and leaves the switchbacks behind.

Once the switchbacks have been completed, the trail maintains a constant, level, southerly direction. Now the views of Mount Shasta become astounding. Though there are times when the trail passes through some sparse clumps of trees, it is now passing through generally open terrain. This means unobstructed views of the snowy giant to the west. The trail continues south for about 0.5 miles when it finally reaches Brewer Creek. For those out for a short hike, this is the end of the officially maintained trail and a good place to turn around. If this is the case, the creek makes an attractive destination. Mount Shasta soars into the clouds, filling the horizon like only a mountain of its monumental girth can. Both the Wintun and Hotlum Glaciers and the Hotoon field are clearly visible. In particular, several of the Hotlum Glacier’s large icefalls are apparent. The Hotlum headwall rises above the glacier. Brewer Creek itself is a noisy, clear stream, free of the glacial flour that colors many of Mount Shasta’s other creeks, such as Whitney and Mud Creeks. The water flows through a wide, rocky, u-shaped trough, a gully cleared out of the loose and rock filled soil. Narrow ribbons of delicate alpine grass hug the shores of the creek, nourished by the waters in an otherwise desolate environment. A few sizeable cataracts liven the song coming from the creek and with the mountain presiding over all of it, Brewer Creek is a beautiful and memorable spot.

For those who intend to climb the mountain, there are a few options to continue upward toward the summit. Three routes depart from here: Hotlum Glacier, Hotlum-Wintun Ridge and Wintun Glacier. Although the Brewer Creek Trail officially terminates at the creek, a well established use trail continues south for 0.15 miles through flat, open terrain. Eventually the trail reaches a small ridge. The ridge gains in height as it climbs to the west but almost fades away as it drops off to the east. Here the trail splits. The most obvious route heads along the base of the ridge to the right, to the west. The other split grows increasingly faint and climbs onto the ridge before also heading west. Both of these paths were long ago constructed by 4×4 enthusiasts and their often wide track reminds one of their former uses. Since the creation of the Mount Shasta Wilderness in 1984, these rugged “roads” have evolved into trails and are used by both day hikers and climbers headed for the summit. The higher road is used to head up to Wintun Glacier. The lower road can be used to climb the Hotlum-Wintun Ridge. This can also be used to reach the Hotlum Glacier, although more direct routes can be had heading up Brewer Creek, Gravel Creek, or simply up the slopes of Mount Shasta from the point where the Brewer Creek Trail makes its final turn to the south.

Mount Shasta from the dry gulch.

Rather than climbing the mountain, the Brewer Creek Trail does provide access to one of Mount Shasta’s most awe-inspiring spectacles, which is Ash Creek Falls. There is no trail to the waterfall’s overlook, but the route is not too difficult. For those attempting a circumnavigation of Mount Shasta, this is also the route to take, since it provides the easiest opportunity to cross the daunting Ash Creek Canyon. To reach the falls, proceed on the use trail to the previously described ridge. Although one could follow the higher road for a short time, it really provides no advantage. Instead, when the use trail reaches the ridge, simply continue south in a straight line, climbing up the low ridge and leaving the trail behind. The terrain is open, with only a few, scattered, stunted trees. As always, Mount Shasta towers to the west. After staying in a straight line for about 0.4 miles, one reaches the edge of a deep, dry gulch. This is the most difficult part of the off-trail route to Ash Creek Falls. Looking across the gulch, the far side has a steep nearly treeless slope that suddenly levels off into a fairly level, heavily wooded plateau. This is what one should aim for in crossing the gulch. There are two ways to go about doing this. First is to stay high, descending somewhat, but keeping a more level, horizontal arc into the gulch. The other option is to go low, dropping all the way into the gulch and then climbing the far side. The challenge in either case is the extremely loose soil that gives way with every step and often sends boulders careening down the sides of the gulch. Staying high means less climbing on the far side, though it has the looser soil to negotiate. Descending into the gulch means that one can climb up to the plateau via bands of trees, thereby skipping some of the looser scree.

Once on the far side of the gulch, continue south. Though the forest canopy is thick, the ground is open and cross-country travel is easy. As one proceeds, be mindful of a shallow, dry gulch. This is the avenue that will lead to the Ash Creek Falls overlook. If the traverse of the deep dry gulch was done accurately, this second, shallow gulch will be impossible to miss. For those who intend to cross over Ash Creek, go past the shallow gulch and head slightly to the west. Upon arriving at the canyon cliff, work upstream, looking for a rocky band of trees descending down into the canyon. Follow this band down. In the canyon, there is often snow forming a bridge over Ash Creek. A rock rib climbs up the other side of the canyon, just above the falls. Even if one is not planning on crossing the canyon, there is still a gorgeous view up the canyon to the base of the Wintun Glacier, as well as a bonus view of the diminutive Watkins Glacier. Far to the south, beyond the canyon rises Lassen Peak and the high peaks of Lassen Volcanic National Park. This view is not to be missed! 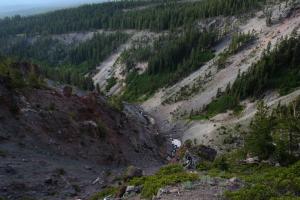 Looking down into Ash Creek Canyon.

For those going to the falls overlook, enter the shallow gulch and head in a southeasterly direction. The gulch gets rockier and soon it drops off precipitously, at times almost vertically. However, there lots of large boulder in the gulch and they make it more a matter of rock hopping that a steep descent. Outside of this gulch, the steep drop down to the overlook must be made through more loose scree so the gulch route is much easier to negotiate. Once at the bottom, it is just a short jaunt to the west before one comes to the edge of the canyon. Here one can observe magnificent Ash Creek Falls, Mount Shasta’s most beautiful waterfall. The falls are about 0.3 miles away from the overlook and its 330 foot drop is dramatic against the rugged, tortured cliff. Like other waterfalls on Mount Shasta, the falls were developed where a band of hard rock crosses one of the mountain’s deep canyons. Unable to erode the rock away, the creek must fall over it instead. Making the view of the falls especially grand is the looming bulk of Mount Shasta with the upper reaches of the Wintun Glacier clinging to its higher slopes. As previously stated, this is reported to have been John Muir’s favorite view on the mountain. In the presence of the wondrous vista, with its canyon, waterfall, mountain and glacier Muir very well may have been right. 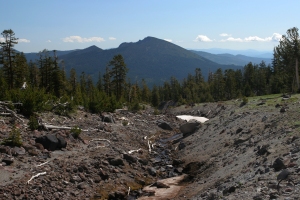 From Mount Shasta, head east on Highway 89 to McCloud. Continue past the main McCloud intersection on Highway 89 for 3 miles. Turn left onto Pilgrim Creek Road and proceed for 7.4 miles. This road will remain paved until it intersects Road 19, which is Military Pass Road. This intersection is signed for Northgate and Brewer Creek. Stay on Road 19 for 7 miles as it twists around the base of Sugar Pine Butte. Though dirt, the road is in pretty good condition and maintained fairly regularly. After 7 miles on Road 19, turn left onto Forest Service Road 42N02. This road is still passable but a lot bumpier. A low clearance vehicle can drive it fairly easily. Stay right at 2 miles then continue 0.8 miles further to the intersection with 42N10. Turn left and climb 3 miles up to the trailhead. Numerous side roads branch off but the main road is obvious. There are a few signs indicating the way to the Brewer Creek Trailhead.