Looking Down As The Smoke Rolls In

It started off clear at the Old Ski Bowl but grew smokier as the sun set.

Monday proved to be the nicest day we’ve had in the last month here in Mount Shasta. The sky was blue, the breeze cool and the temperatures weren’t too high. Mostly, however, it was the fact that we had blue sky. There was almost no smoke at all. It was actually a bit jarring to look up and see Mount Eddy, Black Butte and the great blue canopy above it all. Though we had not planned to have another picnic dinner, my wife and I decided to take our kids out and enjoy the beautiful conditions. We initially intended to head over to Castle Lake. However, when we got to Lake Siskiyou, we could see a thick layer of smoke creeping up from the south and engulfing the Castle Lake basin. Lake Siskiyou also looked very busy and we figured Castle Lake would be no different. We turned around and headed up to the Old Ski Bowl, which looked to be as clear of smoke as it had the rest of the day.

When we passed the Everitt Memorial Vista, we stopped and captured some images of the smoke dramatically creeping north, slowly inching toward town. It was a very eerie sight. 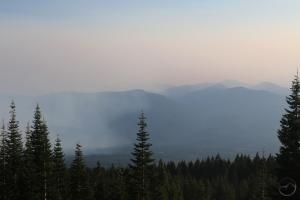 Above Lake Siskiyou the smoke pours through the canyons of the Sacramento River.

We continued up to the Old Ski Bowl and where we were able to see the smoke drift inexorably northward. Soon the Strawberry Valley was once again choked with the nasty stuff. We were grateful to be above it. 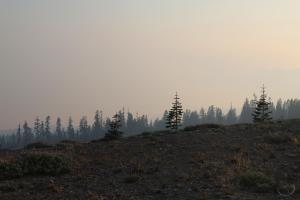 However, we were not completely above the smoke. Looking north toward the summit of Mount Shasta, we could see the smoke slowly obscure the mountain’s great crags. It went from clear and beautiful to smoky very quickly:

In spite of the slight haziness that appeared at the Old Ski Bowl, it was obvious that it was far worse in the valley below. We ate our dinner and the kids ran off to climb on rocks. My wife and I enjoyed the setting and were grateful our kids could have these kinds of experiences. Though a few people arrived and left while we were at the bowl, we were generally the only people at the Old Ski Bowl. This shocked me, since we figured a lot of people would have headed up the mountain since the air quality was really good and the weather nice. Shockingly, we essentially had the place to ourselves.

My beautiful wife enjoys the view from our picnic table. 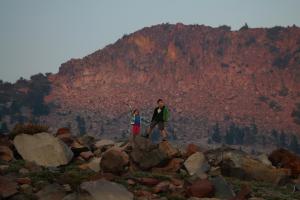 Hummingbird Ridge is turned red by smoke, not alpenglow.

The moon rises above Gray Butte and the smoke.

The Carr Fire is essentially contained at this point and is not throwing as much crud into the air anymore. That trend should continue. Now we have the Hirz Fire to contend with. Thankfully it is not nearly as large as the Carr Fire and is not producing the amount of smoke as its massive neighbor has done. We also have some smoke rolling in from other regions. Fortunately I think we are past the worse of the smoke (certainly praying that’s the case) and can get back outside and enjoy all the trails that wind through this region. If nothing else we can keep enjoying the Old Ski Bowl.

Mount Eddy is the lone mountain still visible through the smoke.

One comment on “Looking Down As The Smoke Rolls In”