Well….you can sort of see the summit of Mount Eddy through the smoke.

It has almost seemed like a wasted month here in Mount Shasta. The Carr Fire has continued to burn, the Hirz Fire has sprung up right next door to it and grown to over 12,000 acres. Worst of all, the smoke has been think, nasty and nearly ubiquitous. However, the last week has seen a slight weakening of this pattern. There have been short stints of clarity as the winds shifted and drove the smoke out of the valley, if only briefly. Thursday was the brightest spot, as the air quality improved to the point that Mount Shasta was a clearly visible as it normally should be. This seemed like the first time that had happened in a month. However, even that bright moment was fleeting and the pall of smoke encroached once again, shrouding everything around us so that, even from the Abrams Lake overpass, Black Butte could not be seen. Disgusting.

The Pacific Crest Trail Association has a useful tool that puts up a satellite image of the entire PCT each day. This is a great tool for comparing the conditions. Here are the images for August 17th and 18th: 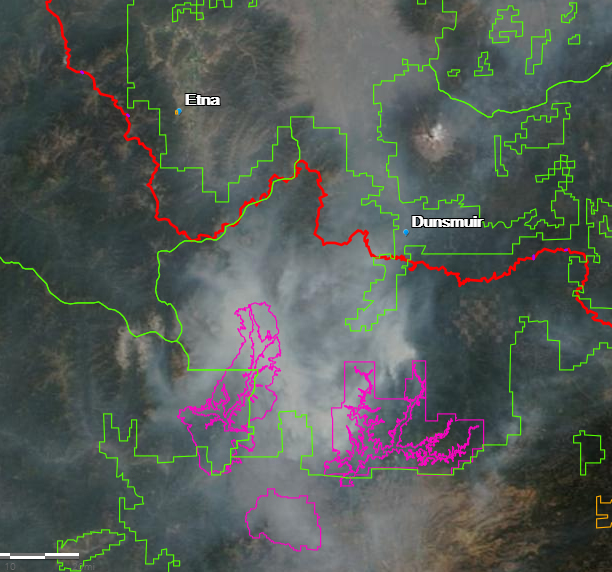 August 17: The smoke covers the Strawberry Valley. Note that the Trinity Alps are clear.

However, I believe that we are nearing the end of this ordeal. I have continued to follow the progress of the Carr Fire via CalTopo and it has been remarkable watching the fire burn itself out. The most optimistic event in this has been the seeming total success of the fire line that was cut in north of the Carr Fire over a week ago. This line started at Shasta Lake near Lakehead and climbed up Backbone Ridge all the way to Damnation Pass. From there is swept west past the very remote Clear Creek campground and then south along the crest of the Trinity Mountains. Here is how the fire looked little over a week ago:

The firebreak is the thin crescent of fire extending from the top of the Carr Fire all the way to Shasta Lake.

If my calculations are close to correct, that fire break is about 18 miles long. It basically bottles the fire up inside the Clear Creek watershed and forcing the fire down to the edge of Shasta Lake. If the fire break held, the plan was for the fire to consumer everything from the crest of the Trinity Mountains down to the lake, at which point it would essentially burn itself out. As planned, this is exactly what happened. Note the progression of the fire on this series of maps: 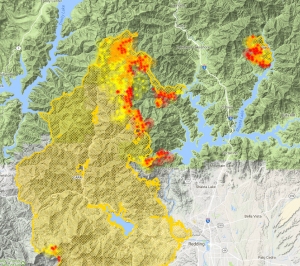 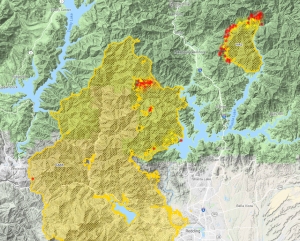 It is obvious from this progression that the fire is essentially burning itself out. It has consumed everything all the way down to the shore of Shasta Lake. There is nowhere left for the fire to go and there is nothing left to burn. Now it is just a smoldering mess and we can just wait for the smoke to eventually blow away. Of course, what this map also reveals is the growth of the nearby Hirz Fire. It is now putting out a significant amount of smoke of its own so we still have that to contend with. However, I hope that the knowledge that we are near the end of the Carr Fire is encouraging.

All we are left with then is the charred mountains that hem in the northwest corner of the great Central Valley. In some ways, it brings that area full circle. Much of those hills had been rendered bare by mining operations and other activities at the turn of the century. When the Shasta Dam was built, there was little vegetation on the surrounding mountains. We have returned to similar circumstances and get to watch nature heal all over again. Hopefully the air will be the first thing to clean up and soon. 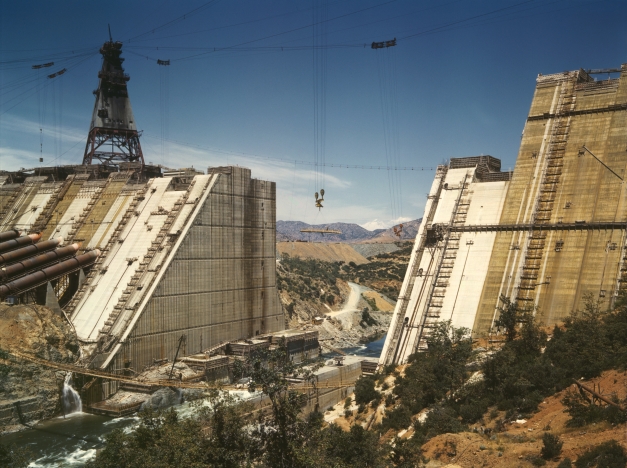 Note the bare mountains in the distance through the gap in the dam. They are bare once again.

4 comments on “Carr Fire Update: Nothing Left To Burn”