First Mount Shasta Sunset Of 2020 (For Me At Least)

The last two weeks have been extremely miserable. Consequent of the virulent flu season we find ourselves in, my entire family came down with the nasty little bug. We holed up for a while and only in the last few days have we all reemerged. I remain the one with the most lingering aspects of the affair but overall, I feel much better. Needless to say, in the midst of the sickness I did not get out and try to observe any of the sunrises, sunsets or other phenomena that went on around Mount Shasta. Between caring for sick kids and being wretched myself, life priorities took preeminence.

Thankfully, as we all now steadily improve, I finally had the health and the mountain conditions that warranted heading out. As has been my wont lately, I decided to head up towards Castle Lake and got an elevated view of the mountain. On my way there, I stopped and grabbed a couple of images of the stark rime ice on Black Butte.

The lack of snow but the brightness of the white ice really made the conditions stand out in the afternoon light. I continued on up toward Castle Lake and got there just as the alpenglow was beginning to intensify. 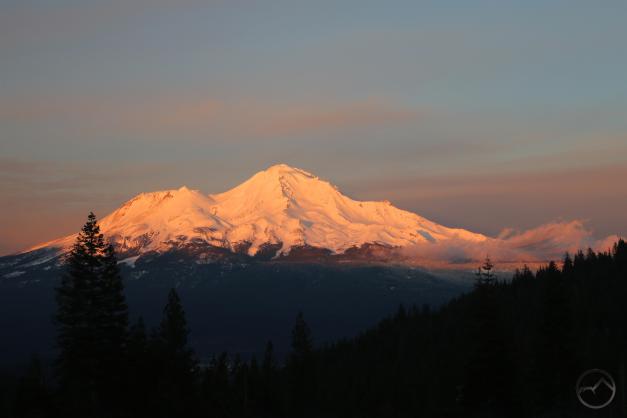 It had been so long since I had paid much attention to things outside, I was pleasantly surprised to see the moon rising alongside Mount Shasta. It was nearly a full moon at that!

I go into my favorite position up on a tall snowback and settled in to record the sunset. The clouds, which had seemed so interesting a short time earlier, began to dissipate. With the potential for really vibrant color in the sky going away with the clouds, I turned my attention to the shadows that form in Avalanche Gulch. I love how all the mounds and heaps cast crescent shadows and the edges of the domes seem to glow as the late fades and it lost. Up around Castle Lake is a great place to really highlight these details. 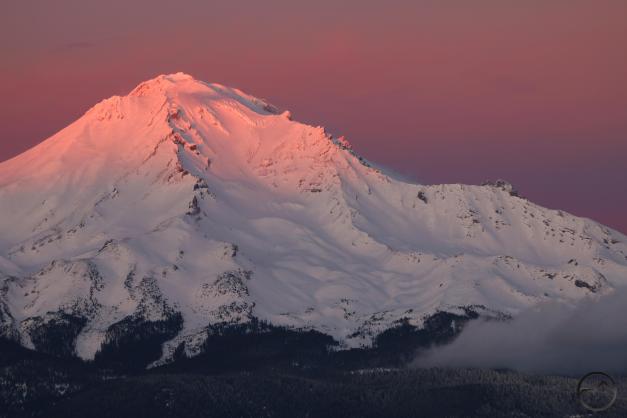 When the light was gone, the sky did in fact turn a deep purple, catching the last bit of glow as the earth spun away from the sun. Interestingly, I nice little disk formed above the mountain after the sun had set. It was a nice little touch to finish things off.

I am thankfully to be feeling better and have a chance to finally get out for some Mount Shasta color in 2020. May there be much more yet to come. Also, don’t get this flu, it’s a nasty little bugger!