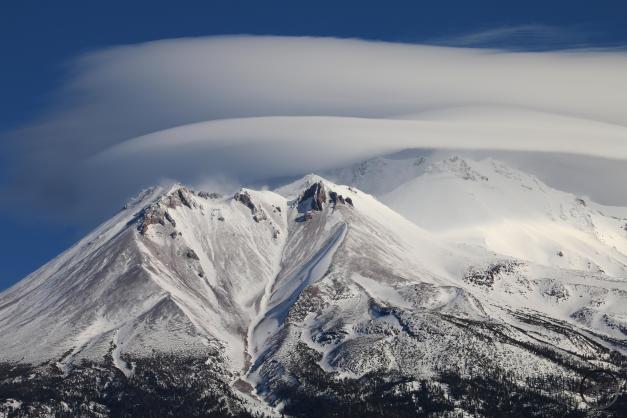 A large lenticular hovers over the summit of Mount Shasta.

Though yesterday was actually a rather beautiful, sunny day, the forecast called for snowy weather by the evening. Furthermore, it was likely to be the last sunny day for a week, which meant a longer shift in weather patterns. The fluctuating systems yielded a lenticular over Mount Shasta which began to manifest around 11 AM. Within an hour it had gone from the barest wisps over the summit to a large single disk-like cloud. From there it bifurcated and developed into a pair of relatively stable large disks with a few smaller ones coming and going as the cloud swirled around the mountain. It was quite fun to watch.

While I had other commitments to maintain, I was able to photograph the mountain from three different perspectives. I captured it from the west, northwest and north. These images all came in fairly quick succession and show the volatility of the  lenticulars and the tumult in the atmosphere indicated by their presence. 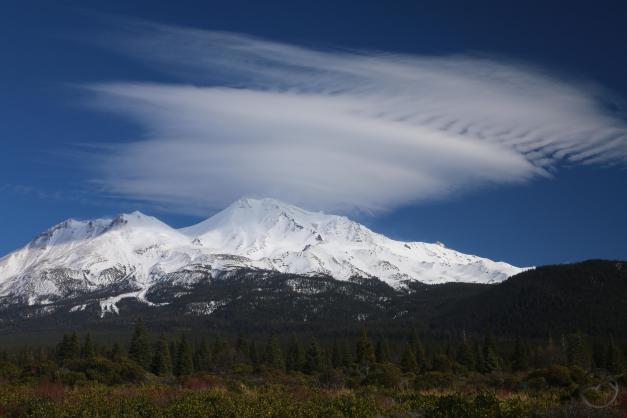 The western perspective was first and the most different from the other two. For a brief time the cloud manifested a large tertiary cloud on the southern side. This did not last long and it dissipated by the time I reached the other locations. At this point, the cloud was changing shape more rapidly than it would a little later on.

From the northwest, the view of Mount Shasta is dominated by Shastina and Diller Canyon. By the time I reached this perspective, the cloud had settled onto the summit of Mount Shasta and more clearly delineated its two primary disks. This is a fairly common form of lenticular on Mount Shasta and it can be really frustrating to photograph. They aren’t always the most interesting shape, they often cover too much of the mountain and at times framing them for an image can be challenging. Nonetheless, they are fascinating to watch.

The last perspective was from the north. Here the two main disks of the lenticular were still visible but more textures and ancillary layers were visible. The light was better as well, allowing the structure of the cloud to be highlighted. Naturally, the view from the north is always pleasing because of the presence of foothills and scale as well. This was a good way to end my little monitoring session of the lenticular.

Unfortunately, the cloud never made it to sunset. The storm moved in and by six was beginning to snow lightly. Not much has stuck to the ground but the rest of the storm looks to pack more of a punch in a few days. I hope we get a good dose of snow!