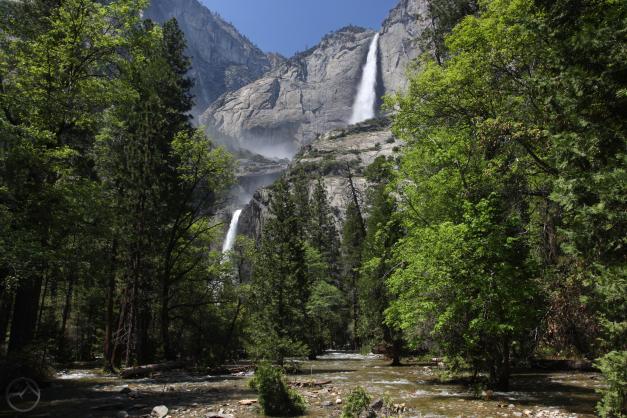 A favorite spot: Upper and Lower Yosemite Falls as seen from the lower reaches of Yosemite Creek.

I love writing about the various aspects of mountains, wilderness, hiking and all the topics that relate to those things. I think this is evident in the variety of things that I address when writing about the Mount Shasta area and I hope that is it also evident in what I have written about Yosemite. I have never written much about my personal history or what adventures I have had on a regular basis (though I like posting images of my kids!). The focus of my writing has, quite intentionally, been on the land. However, with Yosemite it is hard for me to completely separate the personal from the places and that is because it has been a part of my family’s history, my history, for generations. I want to deviate a little from my avoidance and talk about a few experiences that have happened to me (or in some way relates to me) in Yosemite.

The obvious start to this is with my parents. Both of my parents have grown up camping in Yosemite. The first visit I know of by my parents was in 1946. My grandfather had been wounded in World War 2 during the Battle Of Aachen and spent a year and a half convalescing in England. When he returned home to Lodi, he packed my grandmother and my dad, who was 4, and headed up to Yosemite. The began a regular practice of camping in Yosemite, at least annually, but typically multiple times per year. The family spot was always Camp 11 (now known as Upper Pines) but places along Tioga Road, like the decommissioned campground Smoky Jack, were also favorites. Meanwhile, my mom and her family also had a tradition of camping in Yosemite, which for them was the same week in July each year. They generally camped in Camp 7 (which was later renamed Lower River before being obliterated in the 1997 flood. The park made the decision not to rebuild it at that time.) and were a part of a large church group that gathered each summer.

Things continued happily for each family until July, 1963. My dad and his younger brother left Happy Isles on a backpacking trip to Vogelsang. At the same time, my mom and her best friend hit the trail to climb Half Dome. Near Nevada Falls they met on the trail, started talking, and at some point along the way, my dad convinced his brother to ditch Vogelsang and head to the top of Half Dome with my mom and her friend. Apparently they hit it off immediately and were married a year later. 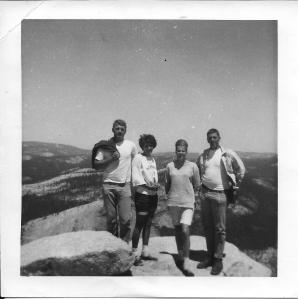 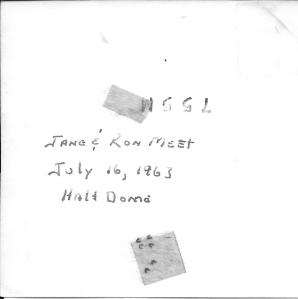 My parents are on the left, on the summit of Half Dome, the day they met.

Eventually my older brother and I joined into the family tradition, as did numerous cousins. We were always there the same week each summer, as well as numerous day trips and other camping trips to both the Valley and other parts of the park. However, by the time I had arrived, the family had migrated to the Housekeeping camp. My mom’s parents were always the head of the main week in July, which was still a part of the annual church group gathering. There was always fishing (especially on the South Fork of the Tuolumne and Illilouette Creek), volleyball on the beach and plenty of hiking and rock scrambling. One event that was a highlight was the “weenie boil” on Cathedral Beach. All the cousins, led by my older brother, who was the oldest, would raft down the river from the Horse Stables to Cathedral Beach. We would be on the river all day and, when we arrived at the beach, it was just in time to have dinner, which would be prepared by my grandparents. 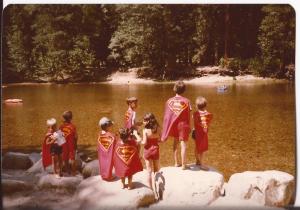 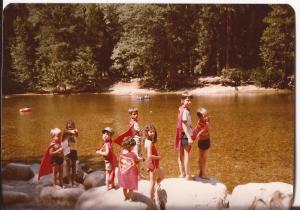 Some of my cousins and I on the Merced, at Housekeeping. My grandmother made us all capes. I’m in the hat.

When I turned six, my parents took me on my first backpacking trip. The destination was my dad’s favorite fishing hole up on Mount Hoffmann. My dad and brother fished like crazy while at basecamp my mom read and I climbed on rocks and tended a small tree growing out of a crack in the granite. I watered it multiple times per day and put more soil around it and tried to help it out as best I could. It was on that trip that I first learned that I did not enjoy fishing, a declaration that stands to this day (my oldest son has decided he does like fishing, a declaration that pleases my father greatly). However, it was then, perhaps, that I first got an inkling that I loved the wilderness. 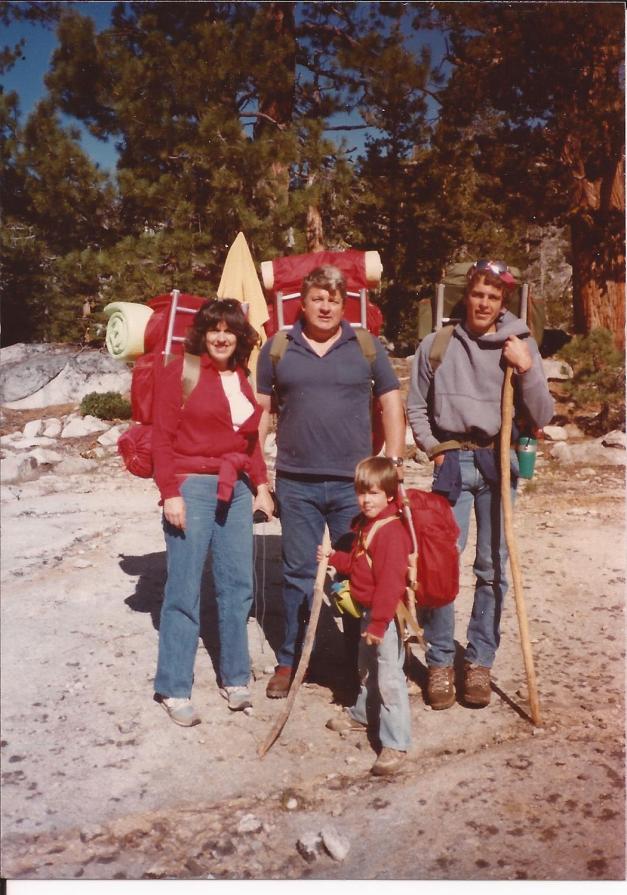 My family on my first backpacking trip. All I had in my backpack was my sleeping bag.

My brother and I were always ambitious in our hiking plans. We naturally tackled Half Dome, making numerous ascents of the great dome. We struck out in other directions. Day hikes to Waterwheel Falls, combining the Four Mile and Pohono Trails for an epic traverse of the south rim of the Valley, or climbing up Yosemite Falls or Indian Canyon and coming down the Snow Creek Trail were the kind of things we liked to tackle. Sometimes we regretted it afterwards and would spend the next day in the river recuperating. A favorite method for this was putting on life preservers and floating the river, sans raft. We found that we were endlessly creative in finding some new ledge to scramble up to or waterfall to climb to the base of. Yosemite was our grand inspiration. 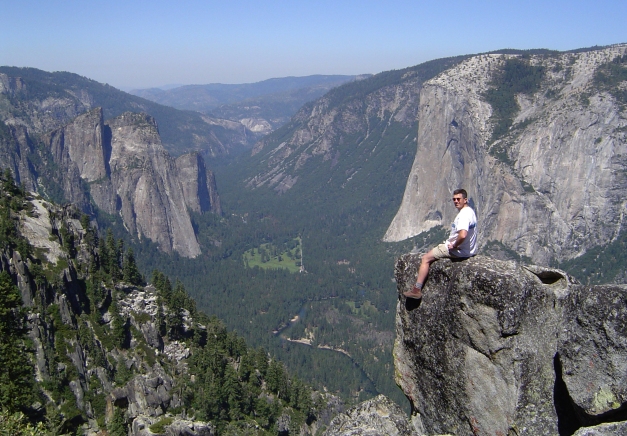 My brother at Roosevelt Point on one of our hikes along the Pohono Trail.

Through the years, we have continued to return to Yosemite. My brother went to the Naval Academy and spent 21 years on active duty. His presence came and went, depending on where he was stationed and what was happening in the world. Whenever he got the chance, he was always in Yosemite. For the rest of my family, we continued on, returning to the park with regularity. My brother finally retired and returned to California. We both had families and our wives and children have joined the tradition, continuing the annual pilgrimage to Yosemite. Now my parents are the grandparents and they thrive watching their grandchildren growing up just as they and my brother and I did. 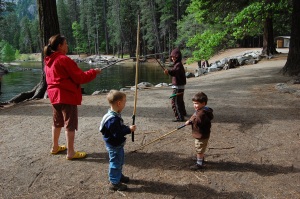 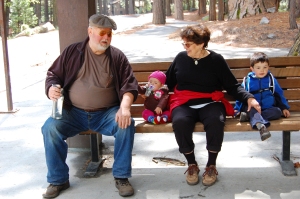 I can say unequivocally that without the foundation of experience that I built in Yosemite, Hike Mt Shasta would never have existed. The yearning to drink in the beauty of Yosemite, the drive to hit the trail, the desire to explore and discover place left off the map were all fruit of the seeds planted in Yosemite. When I moved to Texas for graduate school, my love for mountains and wilderness was rekindled and compelled me to explore and find new places to immerse myself. While I grew to love many new places, it was always to Yosemite my heart longed to return. It was to carry the place with me that I sought to hold onto the wilderness in written word and captured image. What began as an effort to explore through the pen while trapped in school evolved into this website. While it is focused on Mount Shasta, and a more worthy subject is difficult to find, it has always been Yosemite that has been the beating heart that has continued to inspire me to write. In this small but significant way, Yosemite has always been present in this site. My Yosemite Week musings is simply an expression of this.

I appreciate everyone who has journeyed through Yosemite this week. It has been a labor of love and a lot of fun thinking about what to write about. I think everyone ought to be relieved that I did not write a post on my investigation of which old campgrounds bore which numbers (i.e. the infamous Camp 4). Digging into this history of places is a hobby of mine (I think this might come out in many of my articles on the Mount Shasta area) and the human history of Yosemite is layered, fascinating and entertaining. Hopefully these posts have been inspiring and entertaining as well. I am always eager to share my love for mountains, the wilderness and especially Yosemite. I am sure it is equally special to many, many others as well.