2021 Winter Hiking Round Up 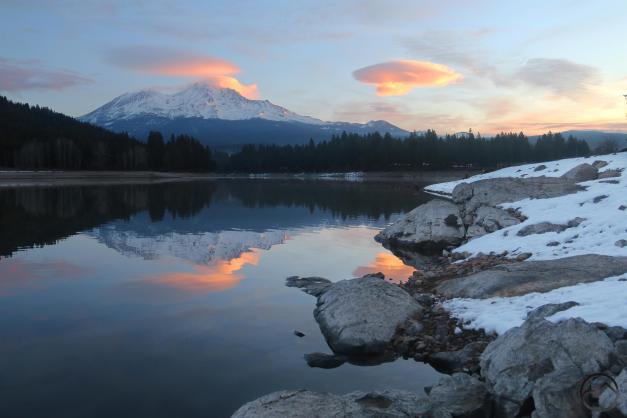 The winter season of 2020-2021 has been with us for a few months now. Things started off pretty slowly, with some rain here and there. I nice snow came through on Christmas day and stuck. The temperatures were low enough for the snow to linger for a while but it eventually melted off. Then, towards the end of January a heavy storm came through, leaving over 3 feet in some inhabited areas, a little less in town. Rain fell heavily in the Mount Shasta’s rain shadow as well. Now we are halfway through February, which means there is only a month and a half of “winter” left, though we know April can be winterlike at times. With a lot of snow still on the ground, it is high time for many of us to start feeling the pinch of cabin fever and we want to get outside.

Fortunately, the Mount Shasta area’s geography makes it possible for numerous trails to be snow-free in the winter time. The volcano rises out of low valley that lies between the high mountain areas of the Cascade Range and Klamath Mountains. The valley floor itself is low enough that it often escapes the snow that falls at higher elevations. The rivers then rush south, falling lower in elevation still and avoid even more snow. Yet, too the north lies the rain shadow of Mount Shasta. Rather than great conifer forests, the area is desert, thanks to the mountain wringing moistures from the storms that move through. Here, the snow falls infrequently and the trails that explore this area offer hikers great views, lots of sunshine and a strikingly different kind of environment from the alpine areas immediately to the south.

Whatever you are looking for in a winter trail, it is hard to find a more diverse and spectacular setting than those around Mount Shasta!

The following are all articles that discuss off-season hiking opportunities in Mount Shasta. They can also be accessed from the “trails” drop down menu. Click to enlarge all images.

Mount Shasta City is blessed with a number of great paths within and just outside of its city limits. Three of the best are the Box Canyon, Ney Springs and Spring Hill Trail. These offer solitude, Mount Shasta Vistas, unique history, spectacular geography and even some excellent waterfalls. These all lie just minutes outside of town. Also, don’t forget that Mount Shasta City has some great short trails right in town! Read more here.

Box Canyon of the Sacramento River.

Inside the Box Canyon of the Sacramento

The Lake Siskiyou Trail is an incredible recreational resource just a couple minutes outside of Mount Shasta City. During the summer and fall, a loop trail encircles the lake. However, in winter the seasonal bridges over the Sacramento River are removed. While the loop can’t be hiked without fording the river (extremely dangerous after storms and during high runoff), several sections of the trail still make great out and back hikes. They feature beautiful forests, the lake itself and incredible views. Read more here.

Winter Hikes On The Sacramento River

Most people in California think of the Sacramento River as the wide, winding waterway that lazily flows through the Central Valley. Here just below the headwaters, however, it is a swiftly flowing mountain river. Deep in its canyon, the lower elevation means it is often free of snow and the trails are easily accessed. Hiking along the river in winter is a treat that offers a taste of wild mountains for minimal effort. Read more here.

Rapids Along the River Trail.

Along the Sacramento River Trail.

Winter Hikes In The Shasta Valley

North of Mount Shasta, the desert landscapes of the Shasta Valley offer a strikingly different environment than what is found along most trails in the region. The only conifers here are junipers and sagebrush is ubiquitous. For those that like the desert, the beauty of this area needs no explanation. For those less familiar, there is ample wildlife, beautiful rock formations and magnificent 360 degree views, crowned by some of the best views of Mount Shasta to be found anywhere. Unfortunately, part of the Yellow Butte Trail has been fenced off. There is still a lot of interesting terrain to explore on the Butte but be aware of land boundaries. Read more here.

Mount Shasta from the Haystack.

At the northern end of the Shasta Valley lies a large parkland administered by the State of California. The Shasta Valley Wildlife Refuge was once a working ranch but is now a haven for a variety of wildlife, especially birds. It is also a refuge for hikers looking for incredible vistas. Though it can be closed at times during winter, there are still opportunities to explore it and once it is reopened completely, it is a place of great beauty, beckoning to be explored! Read more here.

Mount Shasta reflects in a pool by Steamboat Mountain.

Looking north toward the Siskiyous

Other parts of the Mount Shasta area are best hiked in spring, but often, during drier winters with less snow, some of these areas are also easily accessed during winter and offer stunning hikes for those looking for longer and more rugged outings. It must be noted that these areas have a higher chance of being inaccessible during snowy winters.

Spring Hikes In The Castle Crags

The Castle Crags are one of the most majestic mountain features in California. However, their lower elevation means they are often accessible when higher terrain is still smothered in snow. Still, the granite spires and great rock walls stand shoulder to shoulder with some of the most rugged terrain in the state. Though best hiked in spring, when the creeks are gushing and the weather, especially on the south side where most trails are found, is perfect, the winter may still be a good time to get out and enjoy this gorgeous mountain playground. Read more here.

Spires of the Crags

The McCloud River is one of the great attractions of the Mount Shasta area. With great fishing, a trio a awesome waterfalls, and beautiful forest surroundings, it is a popular destination. The waterfall along the river is a great hike and ought to be considered during winter if the access road is open. However, the McCloud River Trail follows the river for 15 miles and any section of this makes a great hike as long as snow is not covering the ground. Read more here.

McCloud River from the top of Middle Falls

Spring Hikes On The Lower McCloud

The Lower McCloud River sees far less activity than the upper section. Separted by Hearst property and the McCloud Reservoir, the two areas are strikingly different. The upper section flows through volcanic terrain while the lower part passes through an outlier of the Klamath Mountain. The terrain is very rugged and can be difficult access during winter. However, when it can be reached, solitude a beautiful scenery await! Read more here.

In the McCloud River Canyon