A Red Sunset Over Lake Siskiyou

The sun sets below Mount Eddy and the Trinity Divide.

Last week the Mount Shasta area was shrouded in an oppressive cloud of smoke. While none burned in the immediate area, there are a few fires to the west in the Klamath Mountains, the Antelope Fire to the east of Mount Shasta and the apocalyptic inferno that is the Dixie Fire to the southeast. The smoke from these conflagrations has been mixing together into a deathly soup that has stayed put over the area and seemed as though it would never go away. Thankfully the pressure off the coast has begun to shift, bringing a little relief to our corner of Northern California. While it remains to be seen how it will effect the fires, it did bring some clearer skies to Mount Shasta.

After dinner we decided to take advantage of it and head to Lake Siskiyou for some evening swimming. This was a far cry from earlier in the weekend. My wife had taken the kids to the lake on Saturday and, as expected, it was a complete zoo. Despite the smoke, a horde had descended on the lake to escape the heat. Naturally, that was not a deterrent to the kids having a good time and they loved cooling off in the water. 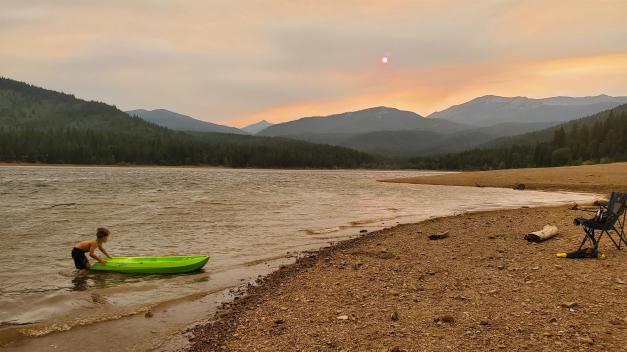 Last night, however, was a completely different experience. We were, literally, the only ones at the lake. At least, we were the lonly ones at North Shore. There were no kayakers or paddle boarders or anything visible. The conditions were also remarkably different. There was smoke, but it was mostly manifest as brown clouds, rather than the inpenatrable blanket that had limited visiblity a to a few hundred yards. The entire lake was cast in an unearthly yellow light. The kids once again had a blast swimming, paddleboarding and snorkeling. My wife and I sat on the shore and read while the wind blew.

Of course, the smoky conditions made the sunset a surprisingly spectacular one. There was enough haze that the sun could be gazed on directly with out any discomfort to the eyes. I could not resist pulling out my camera and catching a few images as the disc sank toward the horizon. Part of me doesn’t like photographing smoky conditions, but I can’t deny the unitque beauty the it can produce.

This has been a rough summer in a lot of ways, the fires being just one component of the challenge. In spite of this, an evening like this, where the danger that confronts us is known and recognized and the kids, blissful and blessed with a lack of concern true to their age, are still able to enjoy themselves is a helpful antidote. Between the beauty and the fun, I could put away the world for a little while and enjoy.

One comment on “A Red Sunset Over Lake Siskiyou”