A Lament For The Gorge, But With Hope

The Columbia River Gorge, a month and a half before disaster.

I have a heavy heart as I watch the fires burning the Columbia River Gorge. In this year of many fires, this one is the stake driven into my heart. Knowing that such a beautiful, singular place is being consumed as I write this has me in a very melancholy mood. I know that I will never see that incredible place restored in my lifetime and it hurts. I was somewhat cavalier about the fires even a few days ago, but now I have a deep foreboding about what lies ahead out here in the West.

The cause of the fire is particularly infuriating. It would seem the fire began when some teenagers were tossing firecrackers off a cliff. The profound recklessness and selfishness of this act is mind-boggling. Frankly, this kind of thoughtless act fills me with unease as I consider that the forests are increasingly filled with people like this and a fraying society is unable to impart reason and rational behavior on younger generations. As the proprietor of this website, it certainly gives me pause to consider what I am doing.

The beauty of the gorge:

And yet, there is cause for hope.

If I may take the liberty to digress into a personal experience, I look back 27 years to 1990. I had just finished the 6th grade and my parents and I made the journey out to Idaho Falls, where my brother was stationed during the early years of his naval career. As a family, we all then traveled over to the Grand Tetons and Yellowstone. This was only a year and a half or so after the cataclysmic fires that ripped through the world’s first national park. Just under 800,000 acres of the park burned. It was terrible. When we were there, even at that young age, I was aware of the fires and the destruction they wrought. Visiting places like Old Faithful, or just driving the park’s loops, the scars from the fire were unavoidable. Even with characteristic good humor, the mark of the fire was on the human geography as well. 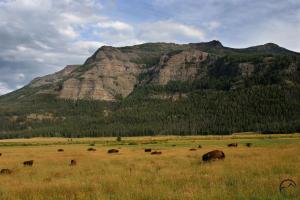 Yet, the beauty had already returned to the land. The geysers still erupted, the waterfalls still fell and the canyon of the Yellowstone was still grand. Now, nearly 30 years beyond that most horrible of fires, the scars have faded significantly and life continues to thrive in Yellowstone National Park. The Columbia River Gorge, like Yellowstone, is a beloved national jewel, one held in great esteem by people across the country. Yet, like Yellowstone, it has now been hurt grievously by fire. It hurts, but like Yellowstone, it too will rise from the ashes. The river will still flow, the waterfalls will still fall and the Gorge will still be grand. Life will regenerate and 30 years from now the Columbia River Gorge will be different but it will still be beautiful.

This is true anytime fire mars a beloved place. Here in Siskiyou County, the last few years have not been kind to the Marble Mountains. Weed has been devastated and a close call was just had by Dunsmuir. Historically, there have been two large fires on the west side of Mount Shasta in the 20th century. Spring Hill itself was burned over by the later of the two fires. Some of the fires have been started by people, others by lightning. We must be vigilant in either case and steel ourselves to the fact that fire will come again.

Let us face that inevitability with courage, just as we must find the beauty in the Gorge once the fire has been extinguished. We can do this with surety, as it has been proven true time and again, nature will restore and heal that which has been hurt.