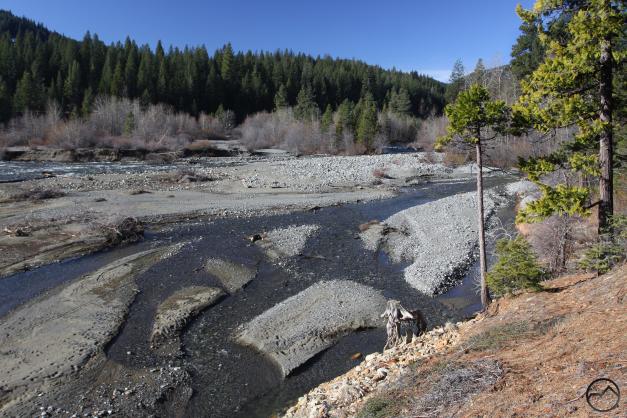 I had not planned to follow up my last post with yet another perspective on the changing landscape at the Sacramento River’s inlet into Lake Siskiyou.  However, the other day I was fixing something on the Lake Siskiyou Trail page and noticed that one of the images was of the inlet area from the north shore side of the trail. It depicted the inlet almost exactly three years ago. Not only had the south channel not been blocked up at that time, but the grabions, the large rock-filled cages that formed the foundations for the bridges across the river, were still intact and visible in the image (thanks to John Schyuler of the Mount Shasta Trails Association for cluing me in to the proper name for these structures!). Knowing how dramatic the changes have been, I was compelled to return to the same spot I had taken the earlier image and document what the area looks like now. I was glad I did. Even though I was fully aware of how much had changed, it was still shocking to see it from the perspective of the previous image.

Having some context for what things used to look like, it is evident that the river has not changed its course so much as it has actually washed out nearly have of the entire inlet flood plain. To gain some perspective on the image, I added red dots that are useful markers to identify position in both pictures. There are also bright green dots just above the grabions (see the gabions with the old bridge placement here).  Here are the images unmarked. Click on them, then you can scroll back and forth to compare them: 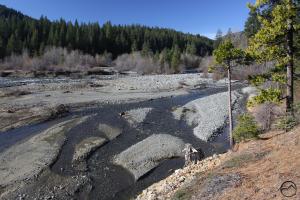 The amount of material that has been moved is incredible. Large amounts of river rock has been deposited from upstream while smaller, loose aggregate has been cleared out and is presumably settled on the bottom of the lake. Where the Lake Siskiyou Trail once traveled the along the lake’s high water mark between the river’s old south channel and the north channel, the river now flows past a continually eroding 8 foot high embankment. A couple hundred yards of the trail are simply gone. Last year’s floods wiped out the old bridge location but left most of the trail intact. This year is quite different. With the water level still so high, it remains to be seen what the actual, final (at least for this year) path of the river will be and what areas will need to be bridged in order to complete the loop around the lake.

The annual placement of the temporary bridges is still a few months away so the loop around the lake is incomplete. However, for those looking for a long hike and an adventure, it is possible to ford the Sacramento River and do the entire loop. The water level is high and close to the main stem crossing would be quite dangerous. Closer to the lake the river now fans out over the eroded flood plain so much that most of the multiple channels are only ankle or calf deep. The wide dispersal area makes it a fairly easy matter to cross as long as you are willing to get your feet wet. Interestingly, two channels are developing on the new flood plain. There have always been two channels here but the smaller of the two was little more than overflow most of the year. Now it has become a bona-fide path for the river in its own right. Still, 90% of the river’s volume remains in the main channel.

The main channel finally begins to fan out.

Close to the lake, the water disperses over a wide area.

Even the small secondary channel has a heavy flow.