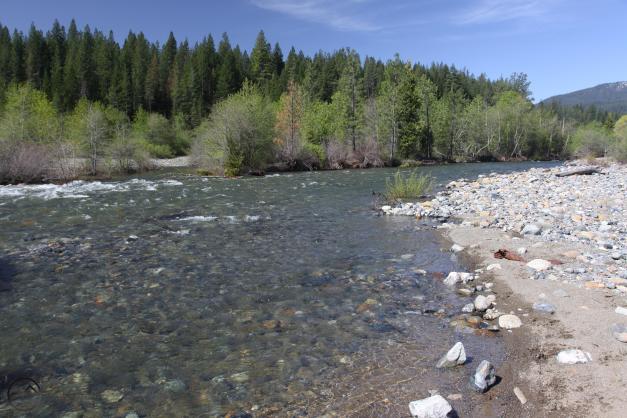 The Sacramento River fans out over its flood plain at the Lake Siskiyou inlet.

After yesterday’s post on the ever-changing conditions where the Sacramento River flows into Lake Siskiyou, I decided to pop back over and check out the conditions at the north channel. To recap, over the last few winters, the river has begun to reshape its path at a rapid rate. Prior to the winter of 2014/2015, the river had maintained a relatively stable course. The area was unchanged enough that construction on the Lake Siskiyou Trail was completed at the inlet. A trail and two sets of gabions for seasonal bridges were installed. The bridges crossed the river’s two channels that entered the lake. However, despite being a drought winter, sometime during one of the storms of 2014/2015, the river dammed up the southern (which was the primary) channel and shifted the entirety of its flow into the north channel. Unaccustomed to the volume of water now flowing through that area, the land gave way and much of the surface area around the north channel was scoured and washed away during high water over the next two years.

Click to enlarge and see the changes over the last few years:

Now the barrier that impeded flow into the south channel has been breached and after two years there is water flowing through it again. It is not nearly as much as contained in the north channel but it is not an insignificant level of water. The area along what is now the Sacramento’s main stem as it flows into the lake is still being altered by the heavy water. Most specifically, the area once traveled by the Lake Siskiyou Trail after crossing the north channel has been washed away. Most of the damage was done last winter but as the river surges past an aggregate-filled cutbank it is obvious that the process of erosion is by no means complete. It is likely that the route of the trail will continue to change over the next few winters as the land it travels is washed into the lake. 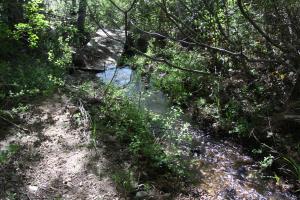 Another noteworthy change is to the small creek that hikers encountered prior to reaching the rocky flood plain along the river. At one time this was a fairly large creek that required a substantial (but movable) bridge to be placed over it. The first flood to come through washed it away but it was hauled back into position. The bridge has now been washed away again. However, during the process of flooding, much of the creeks waterway has been filled with sediment and the bridge is more rendered somewhat unnecessary at this point. Somewhere upstream the flow in the creek has been diverted and the amount of water flowing through is not nearly what it was in the recent past. It will be interesting to see how this area changes during subsequent floods.

Long term, I think the best option for the Lake Siskiyou Trail would be to extend the route upstream from the inlet 0.6 mile to where the river is pinched by the walls of its canyon into a narrower channel than in other areas. It would be possible to build a bridge here that would be high enough to avoid flood waters. Just as important, the steeper canyon walls would facilitate the construction of a trail that would also avoid impact from higher river water. Even better, a further 0.5 miles of new trail past the bridge would connect the Lake Siskiyou Trail to the Sisson-Callahan Trail, linking important pieces of my proposed Headwaters Loop. I think I will reconnoiter the site I think would work and put up a post on it in the near future.

Click to enlarge images of the Sacramento’s north channel at the inlet: