I wasn’t really planning on another post like this, but the way the day rolled out I ended up out again at both morning and sunset. This is most certainly not something to complain about and the rising and setting of the sun around Mount Shasta is always a magnificent sight to behold. 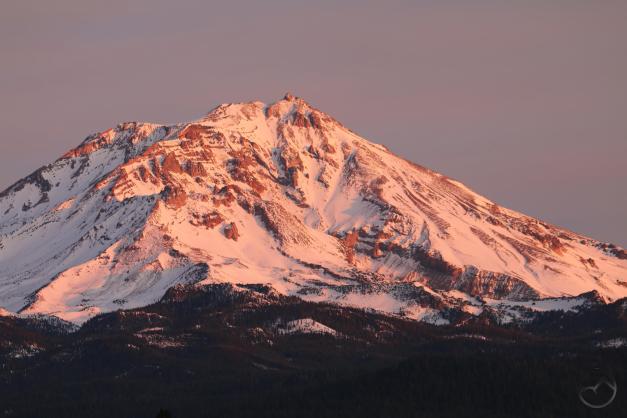 This morning I was over in McCloud investigating some access to things and just happened to be there at sunrise. Funny how that worked out… The sky had some thin, gauzy clouds, the kind that catch the light just enough to make the sky a bit of a different color than normal. The snow made Mount Shasta glow. The southern perspective is one of my two favorites because of the numerous rock spires and lines of strata that add a lot of drama to the spectacle. Awesome Mud Creek Canyon is also visible and being able to see it from down below at the foot of the mountain always gets me excited to head up and explore it again.

At sunrise, the light always goes from pink to orange and begins at the summit of Mount Shasta and then works its way down the mountain as the sun goes up into the sky. The southern side is blessed with being the best angle from which to watch the sunrise and all the excellent features are the perfect canvas for the descending light to dance on.

In the afternoon, I had a few hours free (not of things to get done but of kids!) so I headed back out to Truchas Ridge. I was not certain which vista I was going to head to but by the time I got there I had decided it was a good time to climb up to the summit of Cerro Pedernal. The view from the summit is one of my absolute most favorites. There is a wealth of landmarks to be observed from that vantage and the way the valley recedes in hilly waves to the foot of Mount Shasta, which dominates the view (as it does every view) makes it a an unusual and utterly spectacular panorama.

Sunrise always plays out opposite of sunrise. The light goes from orange to pink and begins at the base of the mountain and fades away from bottom to top. The summit is always the last point to have light on it. After the alpenglow has faded off every other high peak in the area, Mount Shasta still glows with the sun’s setting light. Only after several lonely minutes alight does the warmth finally faded away allowing the cold darkness to embrace the mountain’s highest reaches.

In the end, it was another beautiful autumn day, though they really feel like winter days at this point. Thanksgiving lies just days ahead and on the other side of that the forecast is calling for another significant dose of snow. That’s really going to be the beginning of winter, and all the fun that that brings!