It seemed natural for the third installment of the PCT Spotlight to feature a trail that began at the Gumboot Trailhead. There are two great options here. First is the trip south to the Seven Lakes Basin. The other is the hike north, to Porcupine and Toad Lakes. I ended up choosing the latter, for a couple of reasons. One reason is that the trails sees a little less use. The main destinations are further away than the hike to the Seven Lakes Basin, so more people tend to head to the south. The second reason is that this section of the PCT features more views of Mount Shasta than just about any other part of the long trail. That is tough to argue with!

The hike to Porcupine and Toad Lakes is the longest hike to be featured on the HikeMtShasta PCT Spotlight. It is 11.5 miles to Porcupine Lake and 13 miles to Toad Lake. Of course, if one braves the road up the Middle Fork of the Sacramento River, it is possible to shorten the hike considerably by starting at Toad Lake. In spite of the length, the hike is well worth the effort. It is one of the prettiest trails in the region, with views of Mount Shasta, and the Trinity Dividen as well as vistas of the Trinity Alps to the west. The hike’s destinations are are the two lakes, which are quite different in character. Porcupine Lake occupies a rocky basin right at the base of beautiful Porcupine Lake. Toad Lake lies in a bowl cut into a vein of peridotite rock, which results in sparse vegitation on some parts of the ridge above the water. Both are quite beautiful.

This is a great section of the PCT. After some gradual climbing over the first couple of miles, the trail reaches the crest of the Trinity Divide and levels off. It then begins a very easy traverse along the top of the Divide, weaving back and forth between the east and west sides of the divide. The trail also passes through some very remote sections of the Trinity Divide. Fawn Creek Canyon, part of the South Fork of the Sacramento River is visible from the trail, as is the large basin that forms the headwaters of the Middle Fork. Geologically, the trail passes through some varied terrain, with large outcroppings of gabbro and peridotite, both of which are typical of the Trinity Divide. There are a few springs and lush meadows along this great section of trail as well. More fascinating geology and great views lie beyond Toad Lake too, for those willing to push further.

Meadow along the PCT.

The Castle Crags Wilderness from the PCT

Toad Lake from the PCT junction.

The trail wraps around Toad Lake. 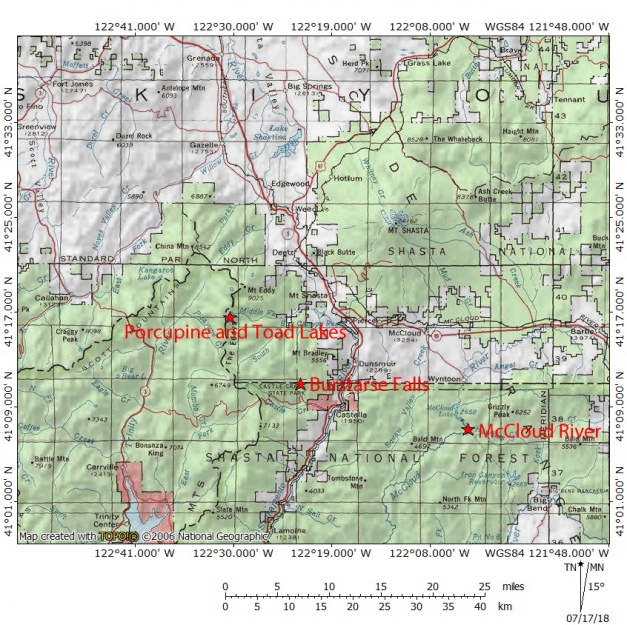 In an earlier post, I highlighted two trails leading to a pair of lake basins at the headwaters of the South Fork of the Sacramento River. Though the South Fork is accessed via a paved road, these trails are not heavily used. Ironically, the road traveling up the South Fork canyon provides access to another pair of lake basins that see a bit more use, neither of which contributes water to the South Fork of the Sacramento. These trails are in fact sections of the Pacific Crest Trail, extending north and south from the trailhead at Gumboot Saddle, which marks the final extent of South Fork’s canyon. The northern section of the PCT follows the crest of the Trinity Divide to Porcupine Lake, which sits in an intimate, rocky cirque below the great pyramid of Porcupine Peak. Another mile beyond Porcupine Lake is Toad Lake, very different in character but still quite scenic. The southern section of the PCT quickly accesses the excellent Seven Lakes Basin. Side trails and an old dirt road split off of the PCT and provide routes to all of the beautiful lakes in the basin. There is also an opportunity to climb Many Lakes Mountain, which has one of the finest views anywhere in Northern California.

The Seven Lakes Basin and Porcupine Lake are two of the prettiest spots in the Mount Shasta area. Both boast cool, clear lakes, great views and awesome, rocky cliffs composed of gneiss. Toad Lake, near Porcupine, is also very scenic but is not in the same class as its smaller neighbor (it is still worth the hike in to it!). If I had to pick one hike as the superior, I would choose the trip to the Seven Lakes Basin. It has excellent views of the Mount Shasta area and the Trinity Alps. The hike to the Seven Lakes Basin also has more destinations and more options for exploration. This includes scrambles up both Many Lakes Mountain and Boulder Peak. The basin is also large enough to absorb lots of hikers without feeling crowded. While the Seven Lakes may be the better hike over all, Porcupine Lake is the prettiest of all the lakes accessed via the PCT from the Gumboot trailhead. The lake is fairly large and almost completely encircled in a rocky bowl. Only the east side is unenclosed and it has great views of Mount Shasta.

The two trails departing from the Gumboot Trailhead are among the longer day hikes in the Mount Shasta area. Both are frequently used as backpacking destinations. Since the Pacific Crest Trail provides entry to both lake basins there is already a built in expectation that one will see other people on the trail. Couple the through-hikers with those eager to hike great trails without having to drive dirt roads and you have one of the busier trailheads in the Mount Shasta area. Don’t let this be a discouragement. Busy by Mount Shasta standards is still lightly used by the crowd expectations in other areas.

The Castle Crags, Boulder Peak and two of the seven lakes.

The Seven Lakes Basin constitutes the headwaters of the main fork of Castle Creek. The creek drains the area immediately to the south of the Castle Crags, which are visible from parts of the basin. Castle Creek is the largest of the tributaries that feed into the Sacramento River after the river leaves Lake Siskiyou. The trail to the basin is one of the most scenic in the entire Mount Shasta area. For little effort, the trail provides excellent views of Mount Shasta, the Trinity Alps and the Mumbo Lakes. An off trail scramble up Many Lakes Mountain yields one of the finest vistas anywhere in the Northstate, taking in the aforementioned sites and adding the Cliff Lakes, the Seven Lakes Basin, the mighty Grey Rocks, and almost all of the Lassen area, as well as reaching as far north as Mount McLoughlin in Oregon. In all honesty, it would probably be more accurate to rename the basin the Six Lakes Basin. One of the lakes is more like a pond on not nearly on the same level as the other lakes. Of the remaining six, only three are deep lakes. This does not mean the other three are not highly scenic, only that if swimming is what one has in mind, head to Upper and Lower Seven Lakes and Echo Lake. Part of Echo Lake is on private land, so please be sensitive to the property owners. 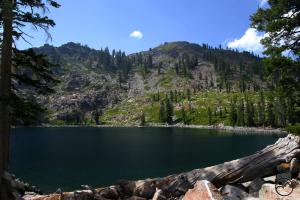 Following the PCT north from Gumboot Saddle to Porcupine and Toad Lakes is a fantastic hike with a high scenic factor. The trail maintains a fairly level grade so even though it is over 5 miles to Porcupine Lake, it does not feel like a tremendous effort has been expended. Along the way, the path scallops across the headwalls of both Fawn Creek Canyon and the Middle Fork of the Sacramento River Canyon. There are some good views toward the Trinity Alps in the west but most of the best views are toward Mount Shasta in the east. On particularly scenic spot comes along the rim of the Middle Fork Canyon, where a large complex of springs produces a large flower filled meadow. The grassy swale makes a great foreground for views of Mount Shasta. Finally arriving at Porcupine Lake, one is treated to one of the prettiest lakes in the Trinity Divide. The bowl is rocky and almost completely encircles the lake. The south side of the lake is dominated by the towering Porcupine Peak, a summit visible from the Mount Shasta City area. The north side has some fine peaks that are worth the scramble to the summit as well. Interestingly, Porcupine Lake has no outlet. Its waters seep underground and emerge as a spring down canyon. Nearby Toad Lake is not as scenic but is much larger and still very attractive. It is worth the extra effort to reach the lake, especially if one is spending the night at Porcupine Lake.